A group of six campaign staffers standing on the corner of 149th Street and 3rd Avenue in the Bronx offered flyers to pedestrians with mixed results as they awaited for Eliot Spitzer’s delayed arrival.

One campaigner, stationed outside an electronics store that switched between playing Usher and primarily Spanish-language music for about half an hour, attempted to give a flyer to a passerby. The passerby rejected it, saying something derogatory in Spanish.

“Glad you didn’t understand what he said,” she told Politicker.

“For comptroller, Spitzer, and we’re going to do fine,” another supporter, Eugene Ray-Daniels, 62, said as he raised his sign into the overcast, chilly air.

Marius Muresanu, Mr. Spitzer’s hired photographer and sponsor of his petitioning party a few weeks ago, got on the phone with the comptroller candidate as time wore on. He explained to the group that Mr. Spitzer had gotten off at the wrong subway stop.

Suddenly the group shuffled down 149th Street to greet an oncoming bus, which Mr. Spitzer had taken from the subway station.

As the bus stopped, Mr. Spitzer emerged, wearing a pinstripe suit and a massive grin on his face. Photographers loved the moment so much that they asked him to reemerge from the bus for a better shot.

“If you can’t get it in three takes, you’re no good,” Mr. Spitzer said, beaming.

Once he hit the sidewalk outside, Mr. Spitzer was all about the business of politicking and found a generally receptive response.

“You old enough to vote?” Mr. Spitzer asked, bending to the height of a young man, clearly under 18 years old.

“Yeah,” he replied, receiving an incredulous response from the candidate.

“I’ll get my mom to vote,” the young man said, later joining the group to pass out flyers himself.

Despite the fact that returning to his home borough of the Bronx brought smiles to Mr. Spitzer’s face and to those of the pedestrians with whom he stopped and spoke, he couldn’t escape the lingering name of another citywide candidate, ex-Congressman Anthony Weiner, who was also forced to resign in the wake of a sex scandal.

“Weiner, Weiner!” one person chanted as he began his trek up 3rd Avenue.

Mr. Spitzer had no interest in talking about Mr. Weiner’s latest, high-profile sexting controversy, however.

“I’m not commenting on the mayor’s race in any way shape or form,” Mr. Spitzer told Politicker, reiterating a response he’s had to give a number of times since he first entered the race. “I haven’t since I got into this race. I’m commenting on the comptroller’s race and what I stand for.”

“As I’ve said, I’ve spoken to all that stuff,” Mr. Spitzer added when pressed on whether he personally felt Mr. Weiner’s actions were wrong. “It’s a fair question but I also think it’s fair for me to, at this point, say, ‘I’m talking about the comptroller’s race and what I want to do as comptroller.'”

Mr. Spitzer was more than happy to talk about the inside-baseball topic of the race’s poll numbers, however. His visit to the Bronx came on the heels of a Quinnipiac University poll, which showed a surprisingly close race between Mr. Spitzer and his rival, Manhattan Borough President Scott Stringer. A separate Marist College poll showed Mr. Spitzer significantly ahead.

“You know, I couldn’t be happier,” Mr. Spitzer said of the surveys. “The way I look at them, I’ve been in this race for a bit over two weeks.”

Increasingly frequent stops like this evening’s are part of his strategy to make sure that his lead holds: successfully schmooze with voters while proving to the press that he can overcome his personal baggage. Every time Mr. Spitzer shook someone’s hand during his 20-minute Bronx excursion, he earnestly told them, “Don’t forget to vote.” Eliot Spitzer talking to a potential voter in the Bronx.

On many occasions, the celebrity candidate, famous for his downfall as well as his comeback campaign, was stopped for photos as he greeted local residents.

“Can I have a picture with you?” one woman asked, holding an iPad up to Mr. Spitzer’s stocky frame.

“You’re not in it,” Mr. Spitzer responded, prompting the young woman to stand by his side in the photo.

“You’re going to get me a copy, right?” he inquired afterwards.

As he trekked up and down the street, Mr. Spitzer didn’t let much bother him in the cool evening air. On this venture, and throughout the campaign, the former has huffed it alone without the presence of his wife. In what could be read as another comparison to Mr. Weiner, a reporter asked Mr. Spitzer if his wife Silda would show up in the future.

It was 6:20 p.m. and time for Mr. Spitzer to leave the vicinity, choosing a black Lincoln as his mode of transportation instead of a public bus this time.

He left a group of supporters in his wake, some still attempting to grab photographs with the former governor as the shiny black car jetted off. 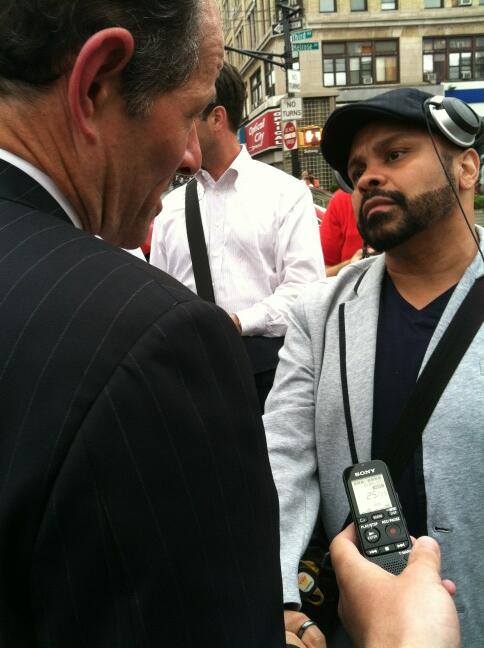