Former Gov. Eliot Spitzer made his first official campaign stop in more than two weeks this morning, greeting commuters in a frenzied appearance outside a subway station in Jackson Heights, Queens.

Mr. Spitzer, bursting with energy, handed out campaign fliers, cornered commuters, shook hands and bounded into traffic more than once—stopping buses, livery cars and even a North Shore ambulance as he touted his unexpected campaign for comptroller under the elevated 7-train track.

While Mr. Spitzer was left on his own during his first campaign stop–a media circus in Union Square the day after announcing his unexpected bid–this time, the former governor was surrounded by a small army of campaign staffers and volunteers, waving signs and corralling voters.

“Eliot, this is Sandeep.”

“Hey Eliot, this is Mario,” they said, pointing commuters his way.

“I love it. I love it. You know every part of politics is fun,” said Mr. Spitzer, taking a break to speak to a small group of cameras and reporters during the brief appearance, which was over within 15 minutes of its designated 7:30 a.m. start time.

As he explained, “There’s the cerebral part, sitting at your desk trying to work through a problem. There is sort of the mass media interview, surrounded by folks like you. And then there is the actual contact with real voters, which is more granular and gritty. And on a hot day, you end up sweaty and dirty. And that’s the part that politics is really all about. So I love every part of it.”

Mr. Spitzer has faced criticism for spending the past two weeks foregoing on-the-ground stops and instead making the rounds on cable and late-night talk shows, including a trip out to L.A. to tape The Tonight Show with Jay Leno and an appearance last night on Late Night with Jimmy Fallon.

But Mr. Spitzer said that’s about to change, pledging to visit every borough over the course of this week and every week from now on.

Overall, the reception was positive as voters greeted the celebrity candidate five years after he resigned from office in a prostitution scandal. Many who stopped said they’d seen Mr. Spitzer during his television blitz.

“He was a good attorney general. He’s was a good governor. And I’ll vote for him,” said Yves Chery, 59, who was on his way to work in the neighborhood and said he recognized Mr. Spitzer from the news.

Joan Page, 48, a home healthcare aide from Brooklyn, was even more complimentary, gushing over the former governor.

Politicker then asked Ms. Page how she knew that he was running.

“I saw him in the paper yesterday, where he slept in Harlem,” she said. In fact, it was the Democratic mayoral candidates– former Congressman Anthony Weiner, Public Advocate Bill de Blasio, City Comptroller John Liu and City Council Speaker Christine Quinn—who slept in a Harlem public housing complex overnight this weekend.

There were other notes of uncertainty. One of Mr. Spitzer’s volunteers, Brandon Cherry, 19, a student at Kingsborough Community College who lives in Brooklyn, said that he hadn’t yet made a final decision about who to vote for, but felt Mr. Spitzer deserved a chance.

“I feel as if, instead of people seeing the good that he has done, they let the bad overshadow everything that he’s trying to contribute to New York,” he said, arguing that Mr. Spitzer’s personal failings were separate from his accomplishments in office.

After the event, campaign field director Scott Harris gathered the dozen-or-so volunteers who’d come out for the occasion on a corner for a pep talk.

“Over and over, we’re defying conventional wisdom,” he told the group touting, “Spitzer for Comptroller” signs. “You know what? You all showed up. Some of you were here at six, some of you were here at seven. All of you were excited about Eliot, and that’s what we like,” he said, instructing them to give themselves a round of applause. “These are the kind of moments that build momentum in a campaign! So everybody hands up, Hand up! Eliot Spizter on 1, 2, 3! 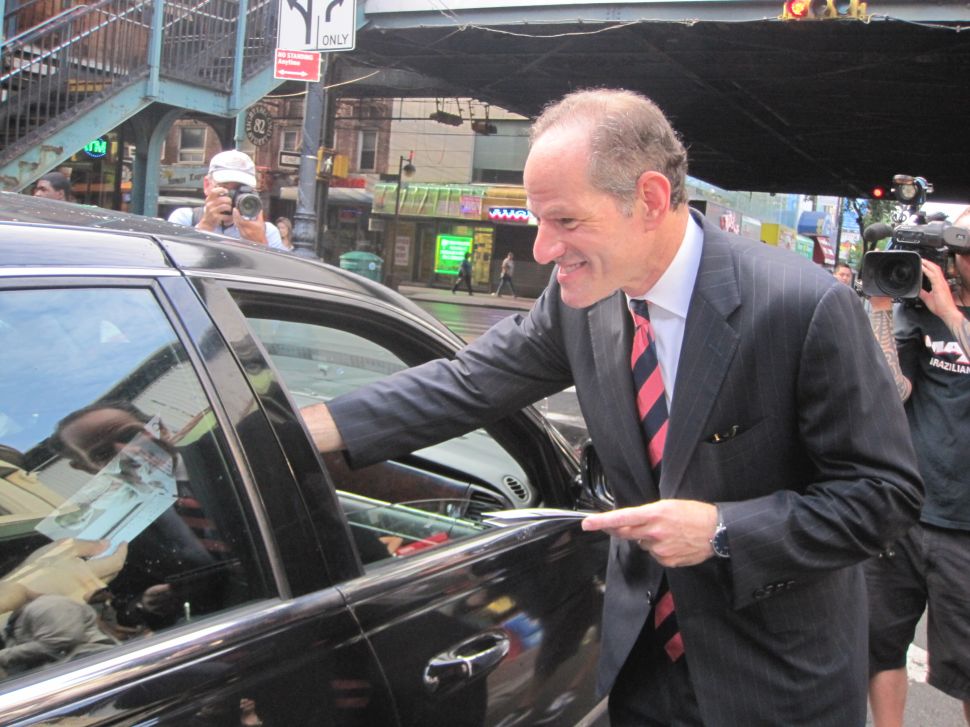