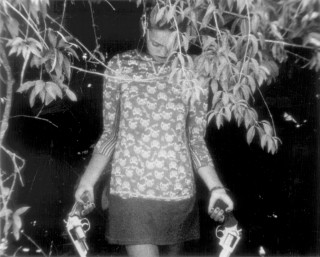 Though Expo 1, the multifarious exhibition organized by Klaus Biesenbach and Hans Ulrich Obrist, is gradually winding down throughout the summer—its VW Dome 2 ended its run in the Rockaways last month and Random International’s Rain Room closes at MoMA on July 28—there are still quite a few events to come before its conclusion on Sept. 2.

For the next few days, Expo’s Cinema program, which is located on the lower level of MoMA PS1 and curated by Kevin McGarry, will be hosting a wild-sounding screening of Leslie Thornton’s Peggy and Fred in Hell: The Fold (1985–2013), which she has been reworking and reediting again and again for almost three decades. The movie follows the exploits of the two eponymous children, who were “raised by television” in a post-apocalyptic world. Film historian William C. Wees has called it “one of the crowning achievements of the post-1980 avant-garde.”

This version promises to be particularly interesting. “We’ve filled the cinema with sputtering old TVs, precariously stacked and nestled in and around the audience,” Ms. Thornton told The Observer by e-mail. “It’s a jungle of technological waste forming a physical and metaphorical frame around the film. Over 27 years I’ve presented this project in different episodes and variations, and for the first time the same debris that taught the two child ‘stars’ Peggy and Fred how to talk, think and be—television—invades the audience’s own physical space.”

Should be a great time.

Screening times follow below. If you want to attend one of the 7 p.m. screenings, at which Ms. Thornton will be present, RSVP to events_ps1@moma.org.