It was half past midnight when Grandmaster Flash retired from his turntable to a steaming cup of tea at the Union Square W Hotel. His voice was hoarse from the hour-long set he’d deejayed for the young and stylish crowd that had amassed in the hotel’s marble ballroom.

We couldn’t help but wonder whether it felt strange to play for an audience that was the total antithesis of the Bronx block parties where he pioneered the now ubiquitous techniques of cutting, mixing and scratching records.

“I’m blessed to have played almost every free country in the world at least five or six times, so I’m constantly tested on my knowledge of music, how to find a way to connect with you,” he said, leaning back in his chair and giving full view to his black sweatshirt that proclaimed “Square Peg Into Round Hole Equals Grand Master.”

“I love the challenge. It keeps me sharp.”

Flash’s appearance kicked off the hotel’s W Gangs of NY summer DJ-battle series, an effort to cater to the natty Brooklyn warehouse-party crowd, in contrast to the business suits and cocktail dresses peopling the hotel bar one story below. Yeasayer frontman Chris Keating took a whirl at the turntables, preceded by a performance by indie post-punk band The Virgins. “It” girls like Chelsea Leyland, Cory Kennedy and Kilo Kish dotted the guest list.

With one hand on a keyboard and the other on the cross-fader, Flash produced a musical mashup of old and new – Daft Punk and the Sugar Hill Gang, Missy Elliott and the Beatles, Bell Biv Devoe and the Jackson 5, effectively whipping a complacent hipster crowd into frenzy. One girl danced so furiously that her breast slipped out of her tank top.

“I was obsessed with the early days of hip-hop,” Mr. Keating told us. “Grandmaster Caz, Kool Herc, [Grand Wizard] Theodore, Melle Mel. I got so into trying to find recordings of them playing block parties. It just seemed so awesome and authentic – the birth of a new movement.”

In further testament to the evolution of Flash’s fan base over the years, the ballroom remained conspicuously smoke-free, until about forty-five minutes into his set when a distinctive odor permeated the crowd and we watched a man in a denim shirt and salmon-colored jeans grind a joint into the carpet.

“This is the way we did it in the ‘70s!” Flash shouted to the crowd, ignoring the zillion iPhones trained on him as he spun vintage rap and funk. “A lot of you might be saying, ‘What’s this music here?’ Without this music hip-hop would not exist.”

Flash is now in his mid-50s, and the gritty New York City of the 1970s, where he first invented the cross-fader out of junkyard scraps, is long gone. As are the days of rummaging through dusty stacks of vinyl to score a hidden gem, a lost B-side or live recording. But Flash doesn’t seem to mind, so long as someone is keeping the memory alive.

“I’m a scientist first and a DJ second, so technology is always good,” he said, when we asked whether digital recording had watered down hip-hop. “[But] there are so many DJs that don’t know the depth of where music comes from. They don’t know enough about yesterday – and today’s people want to know about yesterday. I’m glad that I know so much about music. In the first 10 minutes of my set I’m trying to find you, musically. I’m going through a few things. I’m going to find you, [then] I’m going to inject you until you are tired.”

A member of Flash’s entourage began to laugh. “I’m going to put that online,” he said. “’I’m gonna find you and inject you.’” 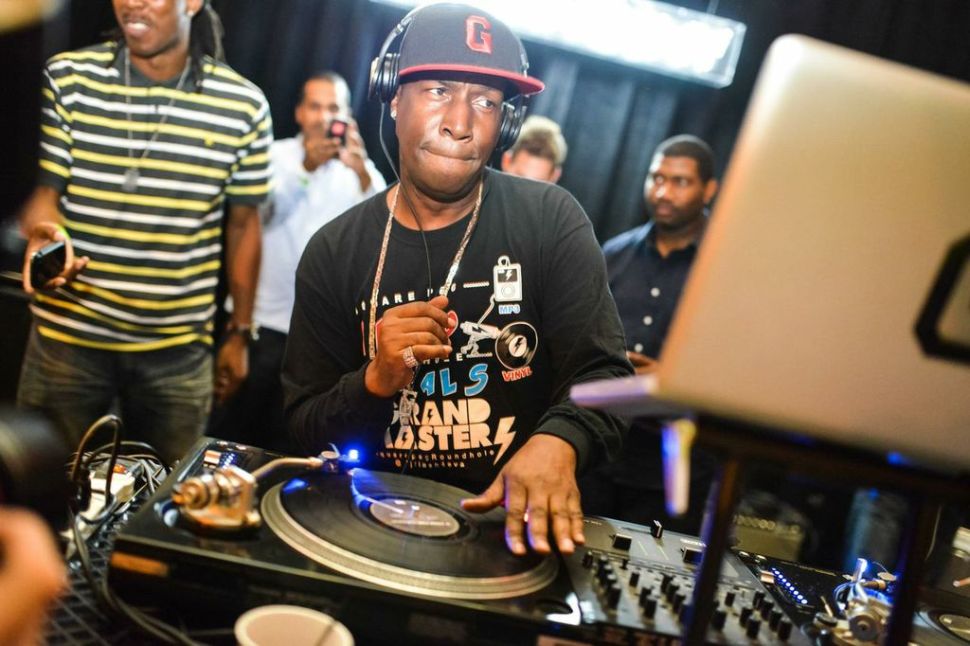