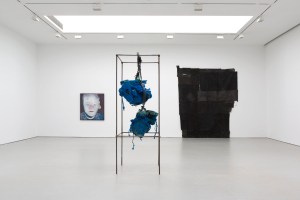 The best pieces in this deliberately scattershot group show, organized by Rodolphe von Hoffmannsthal at Zwirner’s West 19th Street space, flirt with the line between the comic and the archetypal. They’re figurative, or literal-minded, but their figures’ borders are raw, as if a layer of superficial artifice has been torn away to let the depths themselves serve as surface. Marlene Dumas’s leprous oil portrait The White Disease hangs next to Oscar Murillo’s great black doorway to nowhere, an untitled assemblage of oil and oil stick ironed into trod-on canvas, facing Roger Hiorns’s two engines coated with candy-blue crystals of copper sulfate hanging from a steel framework. Spartacus Chetwynd’s three papier-mâché masks and costumes, Gatekeeper (Red), its snout tied with a purple scarf, Gatekeeper (Blue Head), with impossible teeth and globular plastic eyes, and Gatekeeper (Green) hang as guardians of a blank white wall. Lynn Chadwick’s 1979 Teddy Boy and Girl is two ridged, gray and white not-quite-figures in bronze, split up the middle and joined at the hip; and Franz West’s stunning Untitled (Pink, Red, Turquoise), of papier-mâché and plaster, is at once a severed torso and an abstracted heart, splattered with lavender discoloration and turquoise rot, impaled like an insect specimen or a bill of lading on a vertical chain and sitting on a low plywood table with only its topmost surface painted white. (Through Aug. 9, 2013)