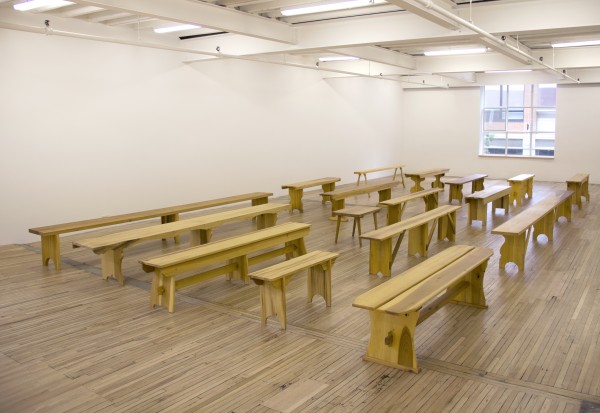 One of New York’s most surprising and rewarding summer gallery exhibitions is almost certainly the season’s sparest (perhaps rivaled only by Ricci Albenda at Kreps). Seventeen low wooden benches in various utilitarian styles, most at least a few feet long, are lined up in rows in the center of Murray Guy so that the gallery resembles a chicly rustic furniture showroom. Most of the designs on which these benches are based come from American utopian communities dating from the mid-1700s through the last quarter of the 20th century, but the pieces themselves are new, expertly fashioned over the past few years by the midcareer British artist Francis Cape.

Because Mr. Cape cut all of his benches from the same bright poplar wood, sourced from around his studio in upstate New York, the subtlest differences in their details register with profound force. Tools of worship, socialization and debate, their designs embody the groups’ ideological ethos, religious beliefs and cultural roots, Mr. Cape argues in an accompanying (and highly entertaining) book, We Sit Together: Utopian Benches From the Shakers to the Separatists of Zoar (Princeton Architectural Press, 112 pp., $20), which offers primers on the histories and aesthetic traditions of 12 such communities.

Much can be read into these Spartan seats. The asceticism of the 18th-century Ephrata Cloister in southeastern Pennsylvania is conveyed by an austere and rock-solid feast-hall bench—just a 12-and-a-half-foot plank supported by three legs—on which congregants would sit while sharing their one (vegetarian) meal of the day. (You don’t want to know what their beds looked like.) The sole bit of ornamentation, a notch at the top of the arch in each leg, suggests medieval European architecture and hints at the roots of their leader, Johann Conrad Beissel, who left Germany to find religious freedom in Pennsylvania.

Even taken purely as objects, the benches are awe-inspiring. Built to endure, often with a bare minimum of materials, they stand as testaments to the ingenuity of anonymous craftsmen and prefigure the economical rigor of modernism. They are also electrifying evidence that socioeconomic alternatives really can be established, at least for a time. Many groups languished after a few generations, dissolved by outside forces or internal discord (celibacy didn’t help), and these benches are, ultimately, chilling reminders of the inevitable collapse of societies whose systems stop working. (Perhaps our present House of Representatives should pay a visit.)

As Arcadia University Art Gallery director Richard Torchia writes in a foreword to Mr. Cape’s book (which includes instructional drawings for readers who’d like to make their own benches), Occupy Wall Street has emboldened a wider segment of the public to imagine new ways of living. Social and political transformation will require—and will be manifest in—new methods of organization, new kinds of benches: wooden, digital and otherwise. Today’s most promising artists and thinkers are taking up that task. This show offers them plenty of fuel. (Through Aug. 2, 2013)