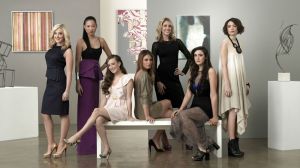 A spokeswoman for Bravo has confirmed that the network’s art world reality show Gallery Girls will not return for a second season.

The show followed the lives of a handful of women trying to make their way in the city, most of them working, at least part-time, in some part of the art world.

The show eschewed the far more clever and widely used term “gallerinas” for its title, and inspired many thoughts and social media thoughts about the role of young women in galleries. Many claimed to “hate watch” the show, even though that’s a totally ridiculous concept because you were supposed to hate it.

R.I.P. Gallery Girls. You were too beautiful for this world. Or something.