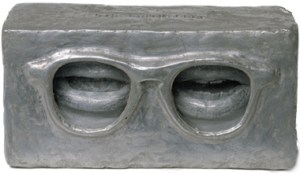 But have you seen ‘ProBio’ wearing Google Glass? Gary Shteyngart has.

Mr. Shteyngart tells the story in this week’s issue of The New Yorker. Here’s the bit about his trip to MoMA PS1, where he goes after being admonished by a guard at the Guggenheim not to record their James Turrell show:

After the disappointment at the Guggenheim, I do a hangout with my friend Christine at MoMA PS1, in Long Island City. I want to see an exhibit called “ProBio,” which, according to the museum brochure, “explores the theme of ‘dark optimism.’ ”

“Some scientists and thinkers have speculated that, with the advancement of applied biological science, humankind may no longer be subject to Darwinian natural selection,” the text reads. I rush through the exhibit, my Glass darting around the sociopolitical extravaganza, but I’m so busy making sure Christine gets a good look that I barely comprehend any of it. There’s a video that seems to be composed entirely of very athletic women holding on to their pregnant bellies. I snap a picture of it with my iPhone (you can’t do a video call and a recording at the same time) and dash off toward the next thing. I suppose that I, too, want to escape the bounds of natural selection. Also, I’m worried that the security guards will confront me for having a recording device on my face, and one of them eventually does (“We don’t own the rights to these works,” he explains). Christine complains about the quality of the video and audio, which she says “is like seeing things through the point of view of an elderly person with sight and hearing problems.”

There you have it.

(For the record, that video of pregnant women was Dis’s Emerging Artist piece. Also, thank you to critic Colby Chamberlain for pointing out this passage on social media.)

So who will be the first major-league curator to sport Google Glass? Just started a bet here in the office. Please share your guess in the comment section below.