A simple but effective sticker campaign that replaces the “C” in Citi Bike with an “Sh” to spell… well, you know, has over taken New York’s bike share.

And believe it or not, Dorothy Rabinowitz isn’t behind it. The crusade appears to be the work of advocates who are not fond of the “corporate appropriation of bike culture.” The sticker sweep relies on the average Citi Bike-hater to broadcast their outrage by downloading a label from the spare, single-purpose website, shitibike.com, print them on self-adhesive shipping labels and let them rip.

So far, the stickers have been plastered all over Lower Manhattan and Brooklyn. The Twitter hashtag #ShitiBike offers pretty thorough photographic documentation of the various “Shiti Bike” outposts.

A Facebook page was created last month to share users’ disdain for the program. The anonymous creator posts links to Citi Bike-related articles by The Huffington Post, Gawker, The New York Post and others, with color commentary.

“How much is the advertising budget?” Shiti Bike muses over photos of Leonardo DiCaprio and other celebrities taking their Citi Bikes for a spin.

The controversial bike-sharing program has seen a scourge of theft and vandalism since its official launch in May – not to mention the months of griping and consternation that came before. The NYPD’s 7th precinct has allegedly gone so far as to allocate resources for daily inspections of the neighborhood docking stations, according to an anonymous tip given to Bowery Boogie. However, a representative for the 7th precinct told The Observer that no resources have been specially allocated to this end.

“Anything that’s new in the city has to be monitored in one way or another, but we don’t have anybody assigned to a particular location,” he said.

The Twitterverse generally seems to approve of the Shiti Bike campaign:

But others are not amused:

Shitibike stickers??? There are bigger problems to be addressed in nyc than busting on citibikes, get a fucking life. #citibikes 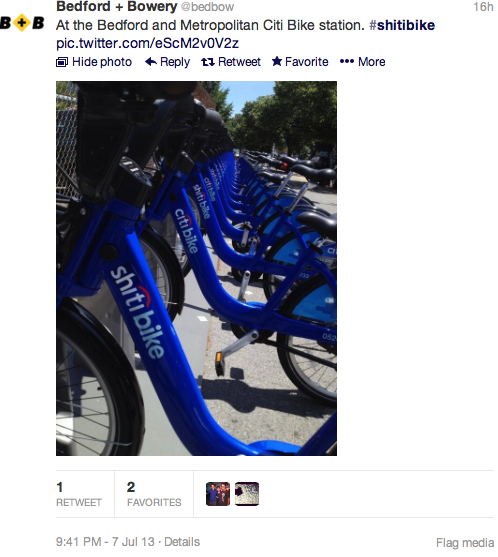