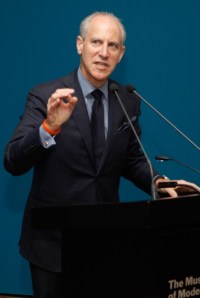 Over at Bloomberg, the eminently talented Philip Boroff went through the tax records of some of the city’s most prominent philanthropic organizations and found that those in the top management positions continue to receive impressive salaries.

Reynold Levy made about $7,000 each weekday as president of Lincoln Center for the Performing Arts.
Glenn Lowry, director of the Museum of Modern Art, earned about the same, $1.8 million in 2011.
…

Lowry’s pay exceeded that of Thomas Campbell, who was named to the position of Met director in September 2008 and earned $1.1 million.

Ellen Futter, president of the American Museum of Natural History, and Metropolitan Museum of Art President Emily Rafferty were close behind Lowry, thanks to moonlighting and onetime payouts.

The piece also compares these sums to those at similar institutions in other cities. Read the entire story here. Thanks to Art Market Monitor for pointing us to this piece.