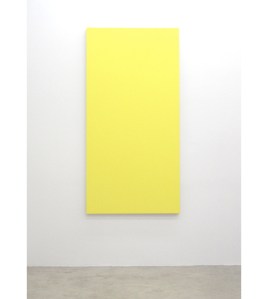 From the press release.

Well look who’s back! After a period of relative non-activity, the mysterious artist or collective that creates work under the name Henry Codax will stage a show later this month, through the floating Shoot the Lobster exhibition platform, at Gavin Brown’s Enterprise.

The artist Jacob Kassay is widely rumored to be among those responsible for the Codax work, though he has denied any such involvement.

Seeming to have appeared out of nowhere, the large monochrome paintings of Henry Codax were first exhibited at the downtown non-profit carriage trade in the summer of 2011. With no press release, biography or checklist, the artist’s hope was that the paintings would “speak for themselves.”

In a recent interview, Henry Codax said of his interest in monochromes, “… another aspect of monochrome paintings is that they function somewhat like a mirror. They are essentially blanks. With little evidence of the hand that made them, it’s harder to attribute subjectivity to them than with most other art, so people are confronted with themselves a bit more, or at least with their own preoccupations or assumptions about the work, including who made it.”

For Codax’s Shoot the Lobster exhibition at Gavin Brown’s Enterprise, the artist will show 6 small and 2 large paintings, in colors ranging from violet to green to blue to an intense yellow.