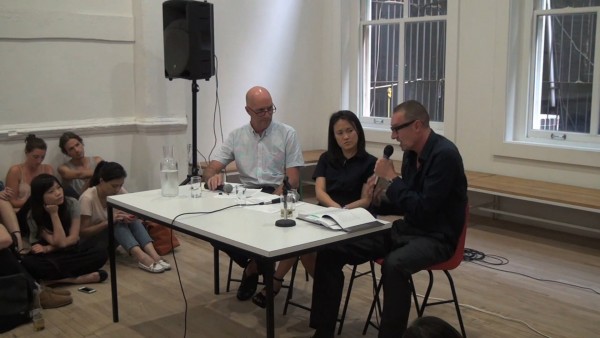 If you enjoy a good, occasionally contentious discussion about art (or if you’re just curious about what Thomas Hirschhorn is up to with Gramsci Monument in the Bronx), I highly recommend that you clear about 70 minutes in your schedule at some point in the near future to take a look at this video of the July 9 conversation at Artist Space Books & Talks between Mr. Hirschhorn and art historians Hal Foster and Lisa Lee, who edited a book of his writings called Critical Laboratory. It’s a wild one! (Critic Maika Pollack, who was in the audience that night, wrote midway through, “Foster vs Hirschhorn shaping up to be as good as Buchloh vs Warhol.” Now you can decide for yourself.)

I don’t want give away all the good parts here, but Mr. Foster really goes after Mr. Hirschhorn, at one point asking him about his preference for using language derived from the armed forces (the artist served in the Swiss military but refused to complete his duty and served time in prison). The Pop artists toyed with commercial language, Mr. Foster says, but “you use military terms, like ‘mission’ and ‘operation.’ Are these terms that you can play with so…playfully?

You can understand why his installations, and especially his interviews, drive some people nuts. (Me, I’m fully onboard.)

With all of the conflict, the conversation becomes a pretty illuminating look at how Mr. Hirschhorn thinks about his very idiosyncratic practice, and how he goes about it. Here he is explaining a bit about how he conducts what he calls “fieldwork,”  investigating a site for a work:

Fieldwork is…to go to the field, and then to try to encounter somebody, say, ‘Hello, my name is Thomas, I’m from Switzerland, I’m based in Paris, I’m an artist, I have a project, do you have five minutes so I can explain my project?’…This is what I very much like to do.

Sometimes, he says, people tell him to “fuck off.”

Though Mr. Foster really goes after Mr. Hirschhorn, he mentions that the two are friends. So it’s just tough love. Something “extraordinary about your practice, Thomas,” he says, “is that you are not afraid to delve into areas of energy, affect, passion that many of us might feel very compromised. You often take up the position of the fan, or the position of indeed the zealot. It’s all about passion.” Which seems like a pretty smart, spot-on tribute to Mr. Hirschhorn’s work and persona.

Have a look at the full video here.