The court ruled that the governor does not have the authority to dismantle an independent agency created by the Legislature.

An appeals court ruled in March 2012, in a case brought by the Fair Share Housing Center, that Christie overstepped his bounds when, under the Reorganization Act, he abolished COAH. The administration appealed that decision.

The Fair Share Housing Center, which advocates on behalf of low-income residents on housing issues, has said previously this case, in part, is about establishing that the governor is not above the law.

The decision today has far-ranging implications because COAH has been a flashpoint of controversy for years.

Its supporters hail it as a tool to help lower-income residents achieve the dream of home ownership.

It opponents decry its tangled web of bureaucracy and onerous and expensive mandates on towns.

At issue is compliance with the Supreme Court’s historic Mount Laurel decision regarding towns’ obligations to provide affordable housing.

Going back to his first gubernatorial campaign in 2009, Christie told supporters that if elected he would “bury” COAH.

The court ruled in 2012 that the power to abolish COAH rests with the Legislature, not the governor. The FSHC said at that time that if the governor’s decision ultimately stands, then numerous other state agencies’ independence would have been at risk as well.

“To abolish independent agencies, the legislative and executive branches must enact  new laws that are passed by the Senate and Assembly and signed by the Governor,” the court said.

“Because COAH is ‘in, but not of,’ an Executive Branch department, the plain language of the Reorganization Act, which extends the Chief Executive’s authority only to agencies that are ‘of the executive branch,’ (the statute) N.J.S.A. 52:14C-3(a)(1), does not encompass, and thus does not authorize the Governor to abolish, an independent agency like COAH,” the court stated.

The case was decided by a 5-2 vote with Justices Hoens and Patterson dissenting.

“COAH’s structure provides further proof that the law passed by the Legislature and signed by the Governor meant for COAH to be independent,” the court said. The court said the law narrowly defines who can be appointed as members and that they only can be removed for cause.

“It places decision making authority in COAH. It does not give the Governor plenary power over COAH’s operation,” the decision reads.

In their dissent Hoens and Patterson said that the Reorganization Act authorizes abolition of COAH based on its statutory language and history.

The court did say that “We offer no opinion as to whether COAH’s structure should be abolished, maintained as is, or modified. That is a policy decision left to the Governor and the Legislature and guided by the Constitution. This case instead is about the process that the two branches must follow if they decide to alter COAH.” 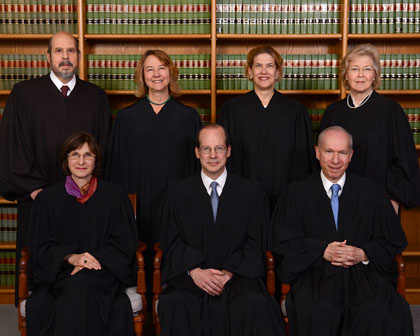