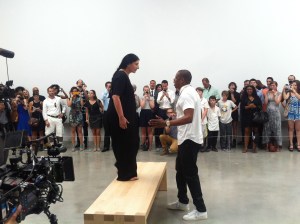 The invitation was cryptic, asking only that guests RSVP and consent to be filmed, but it was obvious, walking into Pace’s easternmost gallery on West 25th Street on Wednesday afternoon, that everyone knew what they were getting into: a music video shoot for Jay-Z’s art-reference-heavy “Picasso Baby,” the second track off his new album Magna Carta…Holy Grail. (His art advisor, Jeanne Greenberg-Rohatyn, got the location through Pace’s Andrea Glimcher.)

Summer is always slow for the art world and an impressive cross-section of the New York’s scenester artists, collectors and critics crowded the gallery’s main space, temporarily humbled by the much bigger fish rapping on a raised platform on the other side of shin-high wires. So close! Amazingly close! The man regularly sells out stadiums, yet there he was just a few feet away, singing gamely to the audio track, at times telling the crowd to come closer, circling around him as he wandered the floor, and then, at the end of that take, shooing us back behind the wires with a good natured, though firm, “now bahck with yez!” 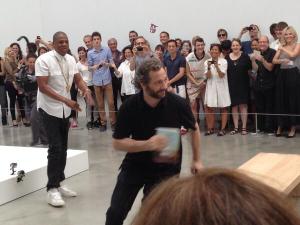 The famous received black poker chips that granted them entrée to a bench in front of the Hova pedestal, where they could watch him as one might stare at a painting in the Met. Or do something else. Rashid Johnson sauntered right up to the superstar and the two did a soft shoe bit where they raised their legs and tapped opposite heels. Bill Powers and Cynthia Rowley went up soon after, Ms. Rowley covering their daughter’s ears during some more colorful passages. Dustin Yellin did a brief breakdance routine, with which Jay-Z did not know what to do.

“There are some genuinely cool people in the art world,” said performance artist Ryan McNamara, who pulled a half dozen people out of the crowd so that Jay might rap at them. “But there are a lot of uncool people, and that really comes out when they’re confronted with the personification of cool, who is Jay-Z.”

Director Judd Apatow used his chip to run up to the bench and bury his nose in a book, pretending to read as Jay-Z rhymed. Insult became comic injury when Mr. Apatow mimed talking on his cell phone, mock-disinterested in the superstar, before dashing off again. Girls star Adam Driver, presumably invited through his co-star’s mother Laurie Simmons, did absolutely nothing, making one wonder why he bothered. 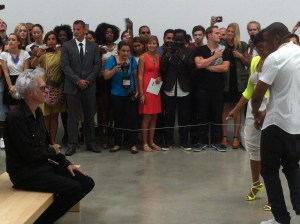 The room really erupted when septuagenarian artist Lawrence Weiner, a wide smile somehow visible through his beard, entered the ring and sat on the bench. “It was a little unclear when Lawrence Weiner came out if Jay-Z had any idea who he was,” said artist Adam Pendleton. Mr. Weiner stayed put, one leg over the other, even when the crowd climbed over the ropes and swarmed around Jay-Z. Marcel Dzama, wearing a polka-dot cape and enormous cow’s head, joined him and started taking selfies. Mr. Dzama said his outfit was inspired by The Adoration of the Calf, which he felt was appropriate for “the adoration of Jay-Z.”

Suddenly the room’s volume dropped to that of a church. “The priestess has arrived!” whispered Mr. McNamara to a friend, tickled by the reverent silence.

The crowd watched, wide-eyed, as Marina Abramovic, swathed in a black column of a dress, kicked off her shoes and strode barefoot toward Hova until they stood on either side of the bench. Anyone who imagined she’d take a seat and stare Jay down, The Artist Is Present-style, from there was dead wrong: the artist was present and she was moving. Ms. Abramovic swayed and danced. She climbed on top of the bench. Jay-Z helped her down and the two wheeled around the room, locking eyes like their lives depended on it. Soon, the crowd stepped over the barricade and formed a dense circle around them. Ms. Abramovic placed her hands on Hova’s shoulders and started steering him around the ring; she pulled him close so their foreheads were pressed together. He kept rapping, but his face registered disbelief. She pushed him away and soon the song was over. They hugged tightly as the crowd went wild. (Here’s a video of that happening.)

Some attendees looked like they’d sauntered in off the set of a more traditional hip-hop video, decked out in belly-baring cropped hoodies, strappy sandals and booty shorts. Others were wearing their usual art-world uniforms. Jerry Saltz sported a black button down.

“Do you know I almost wore a suit today because I thought it’d be freezing in here?” Mr. Saltz asked his neighbor as they waited for the next take. The usually arctic air conditioning wasn’t up to countering the body heat of half the New York art world. Mr. Saltz began querying the three young men to his right, all die-hard fans on Jay-Z’s mailing list who’d been randomly selected to attend. “What’s your favorite album? For me, it’s The Black Album.” 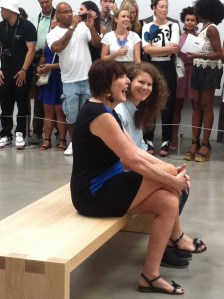 “As an older person, that blew mind. It just opened up a world,” said Mr. Saltz, before diving into a discussion of the track list.

Jay-Z both charmed and disarmed, engaging with anyone and everyone at their own speeds, whether it was P.S.1 founder Alanna Heiss, who spun around on a four-wheeled scooter supporting her broken leg (she fell in slippery Venice) or two little boys, whom he sat next to on the bench, delivering his lyrics like it was story time. “Hold him up like Simba!” one fan yelled from the sidelines. (Hova refrained.)

Asked if he would be cashing in his black chip, photographer Ari Marcopolous said jadedly, “They asked me to, but I don’t know if I want to wait that long.” After shooting the album art for Magna Carta…Holy Grail, the prospect of a Jay-Z moment probably didn’t sound too novel.

Meanwhile, Marilyn Minter and Dana Schutz held hands near the front of the black chip queue. Were they nervous? “Very!” they exclaimed. “We don’t have any cool moves,” Ms. Minter half-wailed. The pair performed admirably, though, dancing with Hova, who grabbed handfuls of Ms. Schutz’s curly hair. Ms. Minter took his chain in both hands and kissed it. 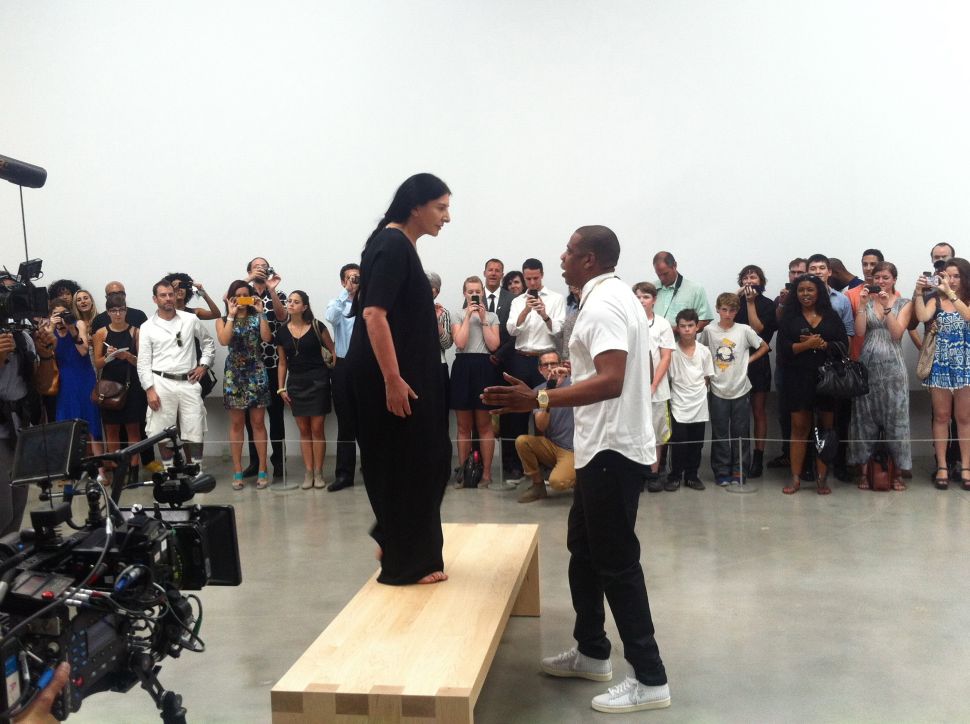