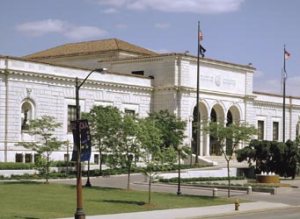 There’s been a lot of ink spilled in the last few weeks over Detroit’s emergency manager, Kevyn Orr, discussing the hypothetical sale of the collection of the Detroit Institute of Arts to pay off the city’s estimated $18 billion debt. The discussion has become slightly more heated since Detroit filed for Chapter 9 bankruptcy one week ago. The director of the DIA said that appraisers from Christie’s visited the museum in early June. And the question remains as to whether, after filing for Chapter 9, the museum’s collection is in more or less danger. Or, really, if the sale of one of the country’s great art collections at the hands of a bankruptcy lawyer (Mr. Orr) is simply ridiculously theoretical and is only getting talked about so much because it is the exact kind of apocalyptic scenario that the national media likes to latch onto with the city of Detroit. They also like comeback stories. Here’s a very level-headed guide on the whole matter, by Mark Stryker of the Detroit Free Press. I will highlight this passage, which Mr. Stryker quotes from Mr. Orr’s bankruptcy filing:

“The City has made no decisions regarding the treatment of any particular asset. The City’s intentions with respect to the City-owned assets exhibited and/or stored at the Detroit Institute of Arts and managed by the non-profit DIA Corporation has generated a significant amount of controversy and media attention. The Attorney General for the State of Michigan has issued a formal opinion expressing his belief that such assets are held in a public trust for the benefit of the City’s residents. The City’s creditor constituencies have expressed contrary views, taking the position that all non-essential City assets should be made available for their recoveries.

“The City reiterates its intention (previously expressed in the June 14 Creditor Proposal) to continue to: (a) engage all interested parties in dialogue regarding the City-owned art collection; (b) attempt to reconcile the competing positions expressed by such parties; and (c) reach a resolution with respect to such assets that will maximize the long term benefits to the City and the prospects for a successful restructuring.”

Anyway, this has now all culminated with The New Yorker‘s art critic, Peter Schjeldahl, writing a 569-word blog post titled “Should Detroit Sell Its Art?” that relays the following conclusion:

Having been asked my opinion as an art-lover—and, incidentally, a citizen, though not of Detroit—I have two answers. Here’s the short one: sell. The long one, which follows, ends in the same place, only garlanded with regrets.

I’ll spare you the “long one,” but you can read it here. This prompted what is probably the most thoughtful piece written on the DIA’s dilemma yet, by Hrag Vartanian of Hyperallergic (it’s undermined only slightly by Mr. Vartanian’s kicker, “Peter Schjeldahl should be fired.”):

This is simply a false characterization of the scenario. Selling a collection the size and quality of DIA’s is logistically near-impossible and financially unstrategic. As one art advisor told Bloomberg, “They can’t put 100 masterpieces on the market at the same time … You will depress the market.” How a $2 billion art collection — and this is a hypothetical figure not factoring in fees, commissions, etc. — will make much of a dent in the city’s massive problems is beyond me. Gutting the city’s jewels, which include the DIA, is not a long-term solution but a short-term fix. What Schjeldahl doesn’t even mention, and I fear he doesn’t know, is that many of the valuable works cannot even be sold because they are under legal agreements by donors.

This is a fine point. Detroit’s bankruptcy filing is an unprecedented financial and legal issue and when people write pieces like “Detroit’s top 10 treasures at risk,” or make claims that their iconic museum is going to have a fire sale any day now, it turns a serious discussion into pure sensationalism and really contributes nothing at all.