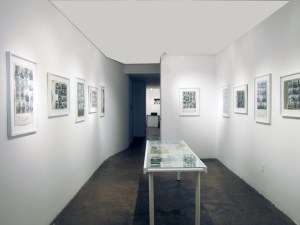 Invisible-Exports, the Lower East Side gallery co-owned by Risa Needleman and Benjamin Tischer, is moving to a spacious new location five years after it opened on Orchard Street. Recently, the gallery website has sported an all-caps footer reading, “Invisible-Exports is moving to a larger, taller, squarer space,” but details were scarce. According to the dealer duo, who spoke on speakerphone as they drove through Queens, the relocation was largely prompted by their Orchard Street lease ending, though it was also “time to grow.” The new gallery at 89 Eldridge Street will, indeed, be larger, taller and squarer, with 11-foot ceilings and what the owners estimate is about two-and-a-half times the amount of space they have now.

Size mattered, but so did shape. “Even though we love our current gallery, the space being as distinctive as it is can be very intrusive,” said Ms. Needleman of the long, irregularly shaped room. A square “imposes itself a little bit less on the work itself.” Mr. Tischer added that a number of the gallery’s artists who have mounted multiple shows in the current, notched space said they wanted “a new shape to play with.”

While much of the new space will be used as a back room, “the entire main gallery is going to be a perfect traditional white cube,” said Mr. Tischer. At least it will be once the massive renovations are complete. Currently, there’s no heat, no air-conditioning and no water in the gallery, which was ravaged by a fire several years ago. “We have to start from scratch,” said Ms. Needleman. “It’s totally raw, which has been fun for us.”

If everything goes according to plan, the new gallery will open on Sept. 6 with a Cary Leibowitz exhibition, kicking off a full year of solo shows. “It just felt like a celebratory thing to do,” said Ms. Needleman of the unconventional programming, though she said it also stemmed from a desire to direct attention to the artists. “Ben and I have a really good time curating these group shows and putting them together, but it’s something that we are doing,” she said. “With solo shows, it’s bringing the focus back to the work and the artists and away from us.”

Invisible-Exports is expanding in step with several other Lower East Side galleries, most conspicuously Miguel Abreu, who recently acquired two outsize lofts at 88 Eldridge Street. “You think there aren’t spaces that could look like white cube galleries, but then you kind of stumble on one,” said Ms. Needleman. I think the Lower East Side has more options than people think.”

That said, she and Mr. Tischer began searching in March and only took possession of the new space on June 15. Three locations they were considering fell through and they visited many more before finally finding the right one. “We kind of stumbled upon it,” said Ms. Needleman of serendipitously discovering the Eldridge Street space after looking across the street at Mr. Abreu’s location. “We turned around and there was this ‘for rent’ sign staring at us,” said Ms. Needleman. They dialed the number on the spot, saw the space and the deal was sealed soon after that.

The pair have entrusted the gallery’s design to a friend, Billy Cotton, who does independent interior design with an emphasis on private properties and the art world. Mr. Tischer idly named a few of Mr. Cotton’s high profile clients while half-consulting a GPS—the two were driving back to the Lower East Side from Build It Green, an outlet for salvaged building materials in Astoria where they were door hunting for the new gallery. They said they saw some possibilities, but now had to turn their attention from fixtures to finding their way. “We’re slightly lost in Queens,” said Ms. Needleman.