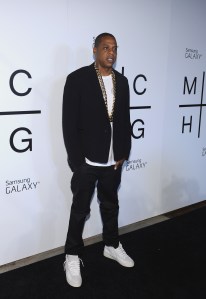 Jay-Z’s never been shy about his interest in contemporary art, but he really goes all-out with art references on his new album, Magna Carta Holy Grail, which was released to Samsung users yesterday, July 4. (The album will officially be released on July 9.) The first two verses of the album’s second song, “Picasso Baby,” are pretty much completely devoted to art.

Among the things that Mr. Carter reveals: he plans to allow his daughter with Beyoncé, Blue Ivy, to touch his Basquiat, he wants “a billion Jeff Koons balloons,” and he “wanna blow up Condos in my condos.” It also contains what has to be first forced rhyme of “Rothko” and “brothel.” Here’s a link to a (somewhat poor quality) YouTube of the song (which will likely be disabled in the next few hours).

Some excerpts below, thanks to the folks at Rap Genius:

I just want a Picasso, in my casa
No, my castle
I’m a hassa, no I’m an asshole
I’m never satisfied, can’t knock my hustle
I wanna Rothko, no I wanna brothel
…

Oh what a feeling – fuck it I want a billion
Jeff Koons balloons, I just wanna blow up
Condos in my condos, I wanna row of
Christie’s with my missy, live at the MoMA
Bacons and turkey bacons, smell the aroma

Yeah, that Bacon play there is pretty good, right?

He also tells a nice little story about a visit to Art Basel, where his friend, collaborator and sometimes rival Kanye West performed last month. (Mr. West, a champion of Condo as well, has been focusing more on high-end design and older art recently, discussing Le Corbusier and the Louvre in songs and interviews.) From the second verse of “Picasso Baby”:

It ain’t hard to tell
I’m the new Jean-Michel
Surrounded by Warhols
My whole team ball
Twin Bugattis outside the Art Basel
I just wanna live life colossal
Leonardo da Vinci flows
Riccardo Tisci Givenchy clothes
See me thrown at the Met
Vogueing on these niggas
Champagne on my breath, Yes
House like the Louvre or the Tate Modern
Because I be going ape at the auction
Oh what a feeling
Aw fuck it I want a trillion
Sleeping every night next to Mona Lisa
The modern day version
With better features
Yellow Basquiat in my kitchen corner
Go ahead lean on that shit, Blue
You own it

The third verse is mostly about watches, the paparazzi and guns, but he does say that he, “Spray everything like SAMO / Though I won’t scratch the Lambo,” and declares, “I’m the modern day Pablo / Picasso, baby”

It’s worth a listen.

Update, 2:30 p.m.: An eagle-eyed reader wrote in to point out that the album cover—and the accompanying promotional campaign—was shot by photographer Ari Marcopoulos!