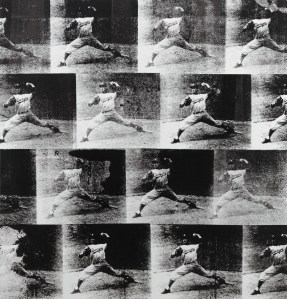 Some of the work in this enormous, uncentered group show, which fills both Untitled on the Lower East Side and Zach Feuer in Chelsea, deals explicitly, if not seriously, with what it means to be Jewish: Daniel Feinberg’s Never Forget, a drawing of a camel and the legend “Never Forget” on a piece of Chateau Marmont stationery; Alex Israel’s Ketubah for Joel and Sarah, executed on commission for Untitled gallerist Joel Mesler’s July wedding; Casual Friday by Isaac Brest and Louis Eisner, a row of uniform vests from B&H Photo; Luis Camnitzer’s Letter, which thoughtfully explains his ambivalence about participating in such an “artificial and anecdotal grouping”; Sy Colen’s Artists, a seven-page history of famous Jewish artists of the 20th century; or Jennifer Rubell’s My Shrink’s Couch, a brown leather couch, formerly belonging to Dr. Baruch Fishman, on a low pedestal. But most of the work—which includes pieces by Sol LeWitt, Philip Guston, Diane Arbus, Alex Katz and Marc Chagall—doesn’t, which leaves us with what we already know: an insoluble identity crisis masquerading as a menacing joke. (Through July 26, 2013)