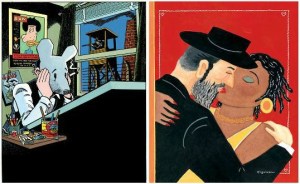 Art Spiegelman, best known for his Pulitzer Prize-winning graphic novel Maus, will be the subject of a retrospective at the Jewish Museum, “Art Spiegelman’s Co-Mix.”

After working in underground comix in the ’60s and ’70s, Mr. Spiegelman helped found the magazine RAW. He went on to create his most celebrated work, Maus, which deals with his parents’ experiences at Auschwitz, as well as the suicide of his mother and volatile relationship with his father. He recasts the family as mice. The work received a Pulitzer in 1992. (Mr. Spiegelman was the first comics artist to receive the award.)

This isn’t the only instance of comic artists receiving serious recognition from the art world this year. Daniel Clowes—the creator of the wonderful Eightball series—currently has a show at the MCA Chicago, and R. Crumb appeared in this year’s Venice Biennale.