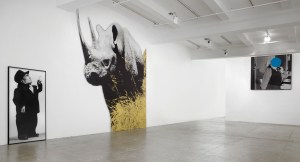 John Baldessari’s eyeballs are on 57th Street. So to look at Dwarf and Rhinoceros (With Large Black Shape) (1989/2013)—the first of the three late-1980s installations that make up this show—the middle of the room is both the best and the worst place to stand. An enormous gray-tone rhinoceros, its tusk almost touching the ceiling, bursts out of a grove of tall, inkjet-print grass growing on Marian Goodman’s eastern wall. A few long blades extend their sandy yellow color into the animal’s lunar skin. Admonishing it from below is a stout midget bound inside the limits of photography and a thin black picture frame as painfully tightly as a chained-up Houdini. He’s dressed like a mobster in a dark pinstripe suit, black shirt, overlarge fedora and white tie, and he, like you, or like the photo itself, stands on a gray floor against a white wall. Across from him, on the western wall, painted like a shadow cast right through you, is a great black Rorschach blot shaped like a rhinoceros. On the north wall, another set of short legs stands on four phone books stacked on a folding chair. The chair is cherry red—in cheery contrast, you assume, to a man about to hang himself. But then, at the top of the south wall, overlooking the room like Mussolini on the balcony, is the same man’s upper body, his face covered by one of Mr. Baldessari’s signature powder-blue circles, with his right hand gesturing and in his left not a noose but a telephone. These price-sticker faces work like isometric exercise: the erasure itself is an emphasis, two nothings adding up to a something—a dwarf placing a phone call to himself. And you can verify that this is not a sterile Platonic cave but a functioning lens from the fact that the two unnamable rhinoceroses, as they plunge about their business, indifferent to their viewers’ miniature dreams, are facing in opposite directions.

Two Stories (Yellow and Blue) and Commentary (with Giraffe) (1989) captures the unreflective grandiosity of Western history as inflected by the silver screen. History is a tower of movie stills tinted blue: a fantasy Eden complete with elephant, zebra and blonde. A Jungle Book fall. A classical bust with unpainted white eyes. A medieval hero with eyes painted white. Two white men dividing the globe, one with his back to the camera, the other’s face hidden by a black new moon. Office towers. A spaceship powered by TV pixels. The whole surmounted by a large prop cross. On the crossbar, composed of stills tinted yellow, are cowboys, gorillas, the Kon-Tiki, two unhappy children dressed as “natives” waiting while their shot is slated and a lady anthropologist with her face whited out.

Installation view of ‘The Difference Between Fête and Fate,’ 1987/2013. (Courtesy the artist and Marian Goodman Gallery)

The Difference Between Fête and Fate (1987/2013) is as simple as the difference between two baby polar bears and a staggering man on fire. If the photo of the bears were crisper, the contrast between their black eyes and noses and the white fur and snow would be dazzling, disconcerting and showily false. But because enlargement has slightly blurred it—not incidentally rendering their fur all the more gauzy and delicate—we can notice, as with a Rembrandt, the magic of the brain’s resolving a field of carefully placed blots into a sensation of visual reality. How beautiful this meaningless arrangement of tones! Or, in the case of the man on fire, how meaningless this beauty: also blurred by its enlargement, but in color, this image has the entrancing sensual appeal of a TV stuck between channels, and if we assume, from the man’s posture, that he’s a stuntman rather than an accident victim, it may be simply because we resent being bothered to think otherwise. (Through Aug. 23, 2013)