As he campaigns tirelessly around the city in this year’s mayor’s race, there’s one thing City Comptroller John Liu knows for sure he does not want to see.

“You know, I spoke with some of the women on the way out. They’re still thinking about some graphic images that were made public this morning,” Mr. Liu, sounding exacerbated, told reporters in Queens last night, referring to new elicit photos of former Congressman Anthony Weiner.

“People asked me, did you see the photos? Absolutely not,” he said. “I have not seen the photos. I hope I never see the photos! Please don’t ever show me any of these things!”

Mr. Liu was speaking after a Jackson heights mayoral forum, where television cameras hounding Mr. Weiner nearly outnumbered audience members. Clearly frustrated, Mr. Liu called on the media to recalibrate in the aftermath of Mr. Weiner’s ballooning sexting scandal, arguing it has pushed other, more substantive issues to the wayside.

In addition to coloring conversations, Mr. Liu  argued the media circus had dissuaded audience members at the forum on Latina women’s issues from participating. In fact, as one reporter noted, the event featured only a single audience question: from a white male.

“People aren’t having a chance to really ask the questions that they want answers to,” he said. “This is an important forum. But you’ve got more cameras and more reporters there than participants, and it’s a distraction … I believe that there would have been many more questions from the audience and much more participating if not [for] this tremendous mass of cameras [that] were hovering over them.”

“I think that’s a little bit intimidating,” he added. “And it would be one thing if the cameras were all there to cover the substance of the discussion. But I suspect that that’s not the reason why the cameras were there.”

Mr. Liu once again stopped short of calling for Mr. Weiner to exit of the race, but also nonetheless made his opinions clear. “Judgement does matter! character does matter! And basic decency does matter!” he railed.

He also didn’t shy away from agreeing with an accusation made by Mr. Weiner Thursday that City Council Speaker Christine Quinn had lied to voters herself when she reversed course on term limits to allow Mayor Michael Bloomberg to run again.

“Elected officials, public figures, should be held accountable to their own words,” Mr. Liu argued. “And in both cases, they did say things that ultimately were not true. If it talks like snake, walks like a snake, guess what? It’s a damn snake.” 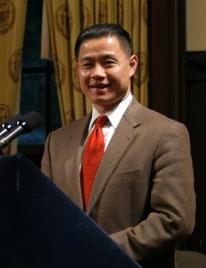