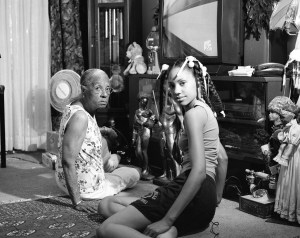 Taken collectively, the black-and-white photographs that LaToya Ruby Frazier has been making over the past 10 years, pictures of her family and their social circle, form an unflinching portrait of life in Braddock, Pa., a city battered by economic depression and environmental degradation. Appearing in small numbers in the New Museum’s 2009 Triennial and the Whitney Museum’s 2012 Biennial, these photos looked out of place in their unfashionable emotional immediacy, which makes “A Haunted Capital,” her first solo museum show in New York, organized by Eugenie Tsai, a welcome opportunity to consider a large, strong selection of them on their own terms.

Time weighs heavily in the approximately 40 photographs here, as three generations of a family interact, pass things on—both physical and immaterial—and change. In a blurry 2003 image, Grandma Ruby wipes her aged husband’s bare bottom. In 2005, she sits on the floor in front of a TV with Ms. Frazier; they stare at the camera, similarly innocent. In 2009, Ruby died of cancer, and she appears one last time in a photo of her in a casket, her daughter, her granddaughter and photographs that remember her arrayed alongside. In a self-portrait from the same year (in a separate show, elsewhere in the museum), her grandfather reappears in the form of his pajamas, which she wears, standing in an abandoned room. Braddock also reappears over the years in various states of disrepair, and while these images are not as bracing as her portraits, they provide a backdrop to dramas that are both deeply personal and, one senses, representative of issues that are far too commonplace in the city. 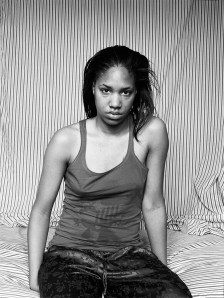 Short texts from Ms. Frazier that accompany some of the photos describe kinds of pain that no art, not even art as vital as hers, can disclose: the cancer diagnosis her mother received (in 2008, the same year as Grandma Ruby) before posing resolutely for a portrait, and the lupus attack that Ms. Frazier suffers as she glares at the lens from the edge of her bed in front of a striped bedsheet.

When photographers train their lenses on themselves, they risk being charged with self-indulgence. Not Ms. Frazier, who manages, with almost preternatural ease, to capture herself, her family and her surroundings as they display mixtures of strength and vulnerability that feel disarmingly candid. Carefully documenting the lives of one small group of people, the show also evinces—and addresses—grave American traumas. (Through Aug. 11, 2013)