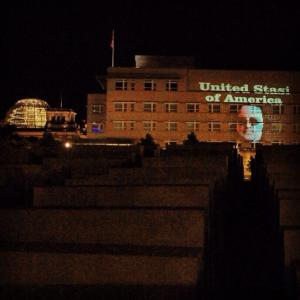 Berlin police are currently investigating German artist Oliver Bienkowski, who projected an image of hacker Kim Schmitz, a k a Kim Dotcom, and the phrase “United Stasi of America” on the facade of the U.S. Embassy in the city last Sunday. Mr. Bienkowski, who spent $6,500 on the guerilla stunt, told Der Spiegel that the piece was a critique of the NSA’s mass web surveillance. Mr. Schmitz appears to have been involved; on July 8, @KimDotcom tweeted, “I defaced the U.S. embassy in Berlin with a truth-projection last night. 0wned!” along with a picture (at left). Police will question Mr. Bienkowski on the grounds that he broke a law that forbids “insulting organs and representatives of foreign countries.”

Mr. Bienkowki seems fairly unfazed by the investigation, though he has hired a lawyer. Not only is he protected under the right to free speech, but embassy representatives have said they do not plan to issue a complaint, which would be necessary for the case to be pursued further. Probably wise not to overreact about this one: the projection lasted for only 30 seconds before police guarding the embassy asked Mr. Bienkowski to move along.