These days, with newspaper headlines that alternate between gun violence and Disney pop stars, we seem to be living in Llyn Foulkes’s America. The still-somewhat-obscure 78-year-old artist, whose retrospective is now at the New Museum, came of age in Washington State in the late 1940s and early 1950s—juvenilia show him drawing Mad-magazine-inspired caricatures of the square types in his small town—but he is strongly identified with Los Angeles, where he has lived for most of his life. Drafted into the army, he lived briefly in Germany before settling in L.A., where he studied art at Chouinard and became part of the burgeoning scene around the famed Ferus gallery. The nearly 100 works in this exhibition, curated by Ali Subotnick of L.A.’s Hammer Museum, form a compelling portrait of that endangered, quintessential American character—the eccentric outsider, critical of the system and hell-bent on doing things his own quirky way.

Mr. Foulkes’s early aesthetic is that of a Dadaist plunked down in 1950s L.A. car and cartoon culture. Using striated plaster and dirty burlap, he strung his messy collages of found objects into paintings. They look like they were made by a junk-store Jasper Johns. Their content, however, is another story: there’s an Anselm Kiefer-level obsession with morbid memories of Germany during World War II. But Mr. Foulkes soon moved on from that vocabulary, adopting a more colorful, simplified, flat, Pop-inspired language in his paintings. His Postcard from Gilroy (1967) looks very much indeed like a blown-up postcard: a stamp-canceling mark reading “Gilroy, Cal. Sep 12” presides over a swelling landscape. He found success as a painter of oversize cows, heroic boulders and road-trip iconography.

In the 1970s, Mr. Foulkes channeled his penchant for found materials into tableau-type paintings with dimensional, somewhat sculptural façades (figures’ heads are shellacked with real hair, and they have Donald Duck-like hands). Made in Hollywood (1983) looks at the Mickey Mouse Club through jaundiced eyes: a page from the club’s 1934 handbook reads, “I will be a square shooter in my home, in school, on the playground … I will be a good American.” Mr. Foulkes’s former father-in-law, who worked as an illustrator for Disney, provided him with the document. A real toy gun, shellacked to the picture’s surface, takes aim at a vintage photograph of two children playing cowboys, their plastic pistols prominent at their sides.

The Mickey Mouse Club phrase reappears in Pop (1985-1990), a Gesamtkunstwerk of a tableau painting displayed in a darkened room. A man watches TV in the company of his two sons. Working electric lights and real windows are built into the picture’s surface; an image of a mushroom cloud is visible on a calendar behind the three figures. With pieces like this one, Mr. Foulkes’s work transcends the junky crime-scene aesthetic of Ed Kienholz, as well as various shabby-Pop associations, to become something entirely new: a theater of Americana (perhaps it owes a little formal panache to painter and showman Frederic Edwin Church’s The Heart of the Andes). Accompanying the painting is a recording made by one of Mr. Foulkes’s slightly pedantic DIY vaudeville-style bands, marked by junk-shop instruments and homespun political musings.

But after this formally ambitious work, Mr. Foulkes’s ideas plateau. Mickey Mouse emerges (in one instance literally, from the head of George Washington) as a major theme, less as critique than as mere branding tic. In another painting, the Disney character stands in the Grand Canyon, holding a shotgun. Considering films like Harmony Korine’s film Spring Breakers, with its mash-up of machine guns and Disney, Mr. Foulkes’s art is looking uncannily prescient (“I will be a straight-shooter … on the playground,” says that Disney text he has always been so skeptical of). Pop art isn’t usually explicitly resistant to popular culture, but in Mr. Foulkes’s case, European art strategies and a uniquely native Beat outsider aesthetic combine to push back against what, historically, turned out to be an unstoppable tsunami of Americana. (Through Sept. 1, 2013) 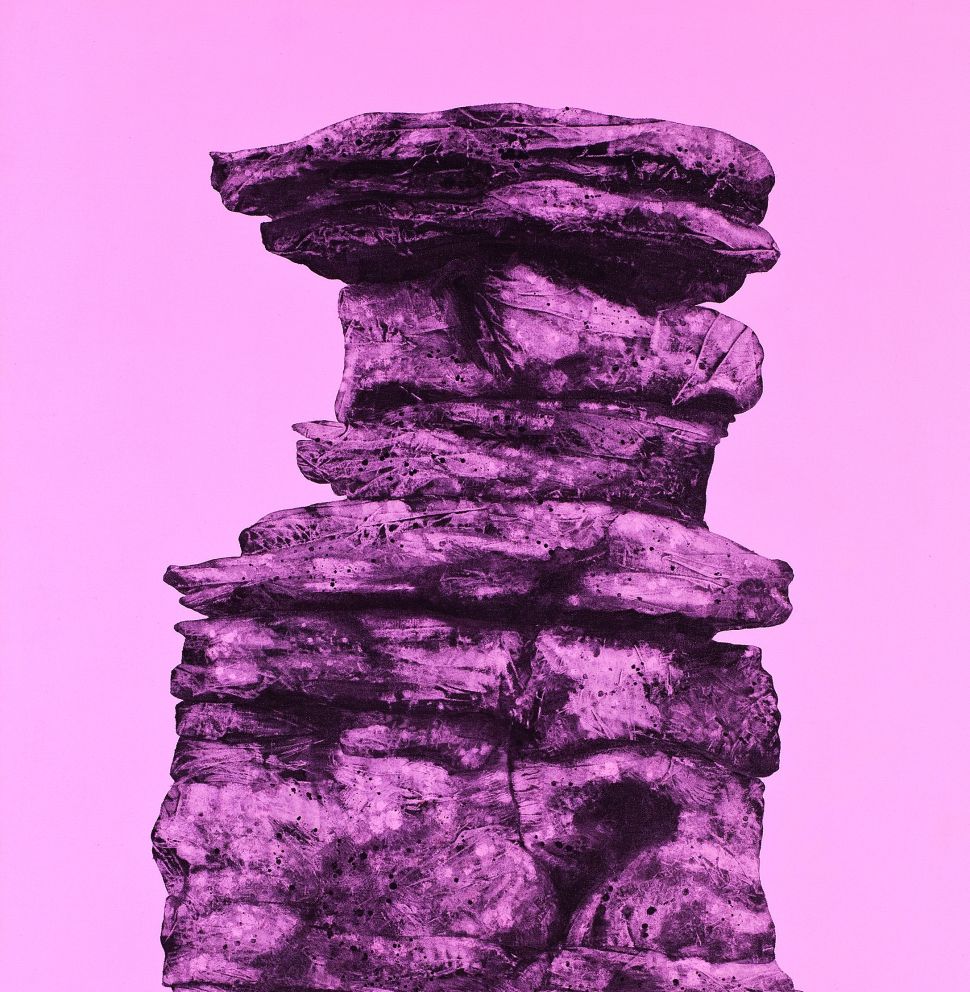