“You pick a mentor when you go to the U.S. Senate,” the Republican front-runner told a roomful of backers. “My two choices are Rand Paul and Ted Cruz.”

Proudly pro life and pro gun, Lonegan said he couldn’t wait to see the look on the face of U.S. Sen. Bob Menendez (D-NJ) on the occasion of Lonegan’s inaugural escort at the Capitol Building.

In a brief and animated speech to his supporters, the wall behind him plastered over with “Lonegan – U.S. Senate” signs, the candidate said he was fundraising toward what he believes will be a $4 million campaign for U.S. Senate.

He distanced himself from Gov. Chris Christie’s comments earlier this week at the Aspen Institute, suggesting the governor’s position reflects a lax approach to the protection of civil liberties.

“This strain of libertarianism that’s going through parties right now and making big headlines I think is a very dangerous thought,” said Christie, as quoted by The New York Times.

Lonegan said, “I respect Gov. Christie’s work but on this issue we differ.”

The candidate for U.S. Senate, a former mayor of Bogota who leads fellow GOP competitor Dr. Alieta Eck, according to the polls, saved most of his dings for Booker.

In his quest to be the U.S. Senator, the Newark mayor in a four-person primary field leads the second-place Democratic competitor by as many as 40 points, according to Quinnipiac University.

“I don’t know if you’ve heard of his guy,” Lonegan cracked of the well-known Booker. “He’s one of the Democrat candidates running for Senate.”

Booker was quoted saying he favors a “robust” discussion on NSA surveillance.

“We had that robust discussion – it was called the American Revolution,” Lonegan said to applause.

He added, “We’re going to send Cory Booker, the failed mayor of Newark, back to Harrington Park, to his parents’ house.”

The candidate dismissed Booker and the Democratic field of contenders as rubber stamps for President Barack Obama.

State Senator Sam Thompson (R-12), chairman of the Middlesex County GOP, went to the front of the room on the invitation of a Lonegan staffer to soak up some applause, along with John Campbell of Plainfield, who’s running for an LD 22 Assembly seat.

“A centralized location,” Thompson said, when asked why Lonegan’s HQ is in Metuchen.  “The fact that it’s (Democratic gubernatorial candidate) Barbara Buono’s hometown – that’s a little added benefit,” he cracked. 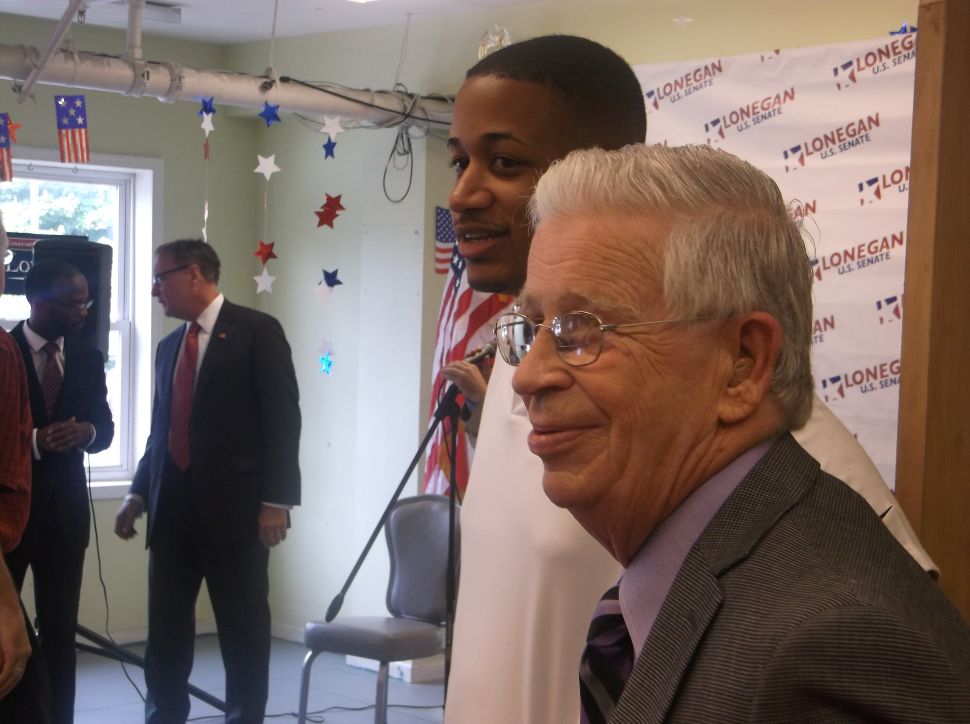