At a time when just about any exhibition or art fair, anywhere in the world, is just a click away, it’s easy to forget that art-making is still an intensely local affair, that individual scenes and real-world interactions between artists still matter, perhaps now more than ever. This fittingly hot summer, we’re welcoming Los Angeles here in New York. Its luminaries fill our museums—Robert Irwin at the Whitney Museum, James Turrell at the Guggenheim, Ken Price at the Met and the Drawing Center, Llyn Foulkes at the New Museum—and this two-venue show brings in its youth, many with slim or nonexistent New York exhibition histories, alongside a few of the city’s still-underrated elders, like William Leavitt, Jim Isermann and Allen Ruppersberg.

Organized by L.A. artists Peter Harkawik and Laura Owens (whose six-month exhibit of gargantuan paintings at her studio-cum-gallery in the city is the most achingly pleasurable show I’ve seen anywhere all year), “Made in Space” is an expanded version of an exhibition the two organized at L.A.’s Night Gallery in March. In a poetic news release, the curators go after then-Village Voice art critic Peter Schjeldahl for his 1981 report from the city (vendettas die hard there, apparently), which lamented L.A.’s lack of public spaces, and the consequent isolation of its artists from one another. He “missed the point,” the curators write, implying that these are instead L.A.’s great strengths, in that every artist is left to range about more freely, to focus more intently on his or her own practice. Their show argues not for a rigorously shared L.A. aesthetic but for a series of loosely shared sensibilities. It’s about a wafting vibe, rather than a particular look.

So what’s the feel in Los Angeles? At the risk of repeating well-established SoCal clichés, it’s breezy and occasionally trippy (but never dangerously so), as in Mr. Isermann’s brightly colored patterned wallpaper, Lucas Blalock’s insouciantly surreal still lifes, which he sometimes chops and tweaks in Photoshop, or Vanessa Conte’s cartoony paintings of a children’s bike, all light, curving lines. Other paintings offer good-natured humor and sex, like Tala Madani’s man who sticks a flashlight in his mouth to project light (and what looks like a stool sample) out of his rear (you really have to see it) and Max Maslansky’s electrically colored image of a man caressing the nude legs of a woman. These pieces owe something, respectively, to L.A. forebears Jim Shaw and William Copley.

The tone falls somewhere between a wry wink and unrepentant playfulness. Mungo Thomson positions two of his famous six-foot-tall mirrors, painted to look like Time covers, across from one another to create a mise en abyme of fame (and the definitive #artselfie environment). Michael Decker stitches together tapestries out of shirts bearing questions—“Got pot?” “God weed? “God god?”—or animals sporting sunglasses. Joshua Callaghan has produced a 5-foot-2 paper clip shaped vaguely like a human figure, which reads like a jokey Robert Therrien. Hannah Greely’s goofy small blue mop-like sculptures, which channel Yves Klein’s sponges and Star Trek’s Tribbles, sit next to one of the show’s strongest works: Mr. Callaghan’s full-scale charcoal rubbing of a Ford Focus on a 20-by-10-foot piece of canvas that now hangs from GBE’s ceiling.

There is also, as there seems to be everywhere these days, a dandyish, slapdash mode of abstract or assembled painting. It’s a bit too cute in Rebecca Morris’s dabby works and Josh Mannis’s Batman (2013), a gridded sheet slung with a red chain. They’re joined by plenty more sunny and instantly forgettable paintings.

Happily, that classic L.A. medium, ceramics, is present in the form of some Ken Price-worthy cups by Patrick Jackson, oversized barnacled beauties in expert shades, and a weirdo miniature sculpture of a body. And there are some exuberant pieces of design by Jorge Pardo and Peter Shire, who’s made a madcap Calder-style mobile.

I’m charmed by the laid-back joy of a lot of this work, its unconcealed desire to please, even though I can’t really relate to it (much less get too excited about it). I yearned for a dose of Sturm und Drang, along with some of the hypercompetitive tensions that animate and advance art in New York. (Which is why the manic, angsty “Freak Out” at Greene Naftali, even if overcrowded, is the show of the summer in my book.) California, as they say, is another planet. A really pleasant one. But I’d rather be made to feel stressed than complacent. (Through Aug. 10, 2013) 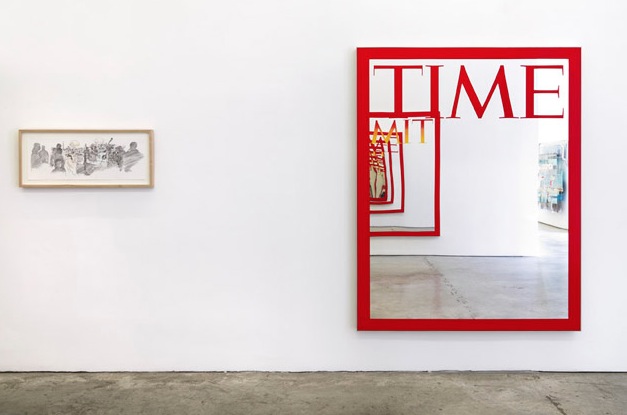