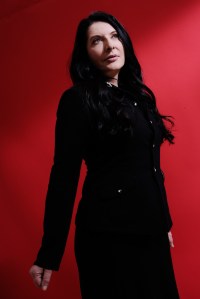 I’m no Reddit expert, but it seems like Marina Abramovic did pretty well with her Ask Me Anything, the website’s crowd-sourced interview feature that has questioned everyone from Barack Obama to a founding member of The Presidents of the United States of America (the band).

She did this mainly by cranking up the creepy pseudo-mysticism.

Marina, when you are having a bad day what do you tell yourself/ what keeps you going? x

To which she responded:

I’m not attached to bad day or good day. We always know after the rain the sun will come. It is a law of nature. When it is really, really bad day, I take a long bath full of Kosher salt and baking soda, soak for 30 minutes, and I feel better.

What makes you cry?

And other people’s unhappiness.

You get the picture. She’s like a second away from saying “do or do not, there is no try” in every response. Oh, and speaking of lies, there’s this lie by omission. The question:

You do not appear to have aged at all in 40 years. Are you a vampire? If not, to what do you credit your eternal youth?

To which she says:

Right, I mean. That and all the plastic surgery.

The most provocative question was tied to her Kickstarter for the Marina Abramovic Institute for performance art, which isn’t going so well and is presumably why she did the AMA in the first place.

Why does a wealthy artist, who sold her loft of $3.2M last year, need 600K from fans just to pay one of the world’s best known architects to sketch up an idea for her personal project?

The MAI institute is not a personal project. MAI is for everybody. I donate the whole building which I bought on my birthday for $950,000 to the non-profit organization and I don’t own it. I also paid another half a million for the master plan of Rem Koolhaas from my own money and the office budget for five months. So this does not belong to me anymore, it belongs to anybody. If this kind of concept is something our society needs, they have to join me to create it.

Also, I had a difficult life, and only since the last ten years I earned money, and most of the money I spent on supporting this institute.

The person who asked the initial question was not convinced:

It still doesn’t explain why the public should fund her pet project. Maybe she sound make it smaller and then grow it? Paying one of the world’s major architects seems excessive.

This question was not answered and though the thread about why exactly she felt the need to do a Kickstarter started out strong it was soon voted down in favor of the salt bath stuff. Still, worth a read.