McGolrick Park and its glowing lights of past.
(via Flickr)

McGolrick Park, as is often the case, has seen better days.

Following a slew of vandalism in the last week, McGolrick Park now sits shrouded by darkness after a group of teenagers set fire to the maintenance building, stripping the park of its electricity. The blackout, coupled with the teen gang’s vicious vandalism campaign, has led residents to steer clear of Greenpoint’s once “lovely, pretty refuge.”

“I’ve told my three children to stay out of the park and they’re scared,” resident Kari Riess told DNAinfo. “They see the results of aggressive behavior and then you put the lights out at night…that’s a very scary thing.”

“Aggressive” is certainly one way to describe it. After dabbling in arson last Tuesday, the teens returned the next two days to pour buckets of paint along the park’s grounds. To cap off their tour, they held a knife up to the throat of a dog who was out for a stroll with its owner on Thursday evening.

“The dog’s owner was livid,” Holly Fairall, co-chair of Friends of McGolrick Park, told The Brooklyn Paper. “She spent all day in the police station.”

Several days since the raids appeared to wane, McGolrick Park remains trapped in a blackout. The city’s Department of Transporation declined to predict when the lights would be fixed, DNAinfo reported.

The city pledged to step up park patrol in the vandalism’s aftermath, but some Greenpoint residents remain far from solaced.

“I’m scared to confront them,” Ben Moss told The Brooklyn Paper. “They are such a big group of strong kids.” 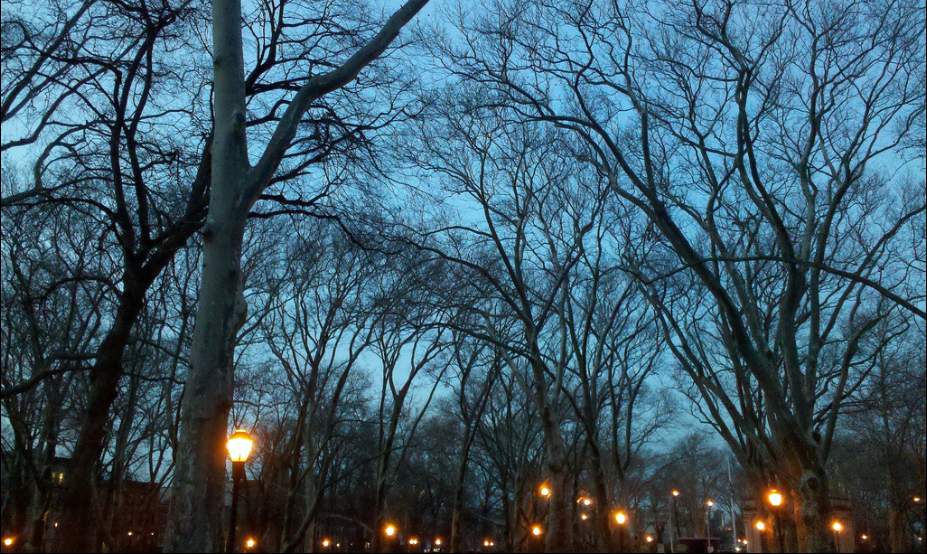