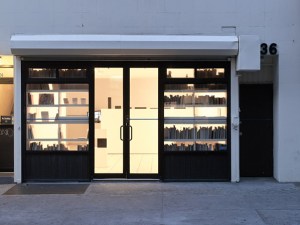 Dealer Miguel Abreu, who opened his eponymous Orchard Street gallery in 2006, is creating what might be the closest thing that the Lower East Side has to the multi-location enterprises common in Chelsea. Once the work permits are processed, he will begin renovating two 7,500-square-foot loft spaces that he is renting at 88 Eldridge Street. “It’s going to be a very dynamic, active space with lots of different options for artists, but also we’re going to have a bookstore in there and our Sequence Press book division,” said Mr. Abreu, who works with artists like Liz Deschenes, Sam Lewitt, R. H. Quaytman, Eileen Quinlan, Pamela Rosenkranz and Blake Rayne. He has enlisted Common Room, a local architecture firm, for the job. According to the dealer, it’s the biggest project the firm has ever undertaken.

“I think it’s going to be very unique because it’s going to be Chelsea-size, big-gallery size, but it’s going to be run very differently,” said Mr. Abreu, who will continue to install smaller, experimental shows in his original space. He said he plans to use the spaces flexibly, sometimes holding one show between the two locations, sometimes mounting separate exhibitions and occasionally letting one or both spaces lie dormant.

“My main operation will be on the fourth floor and upstairs we’re going to have storage and fabrication,” said Mr. Abreu of the new Eldridge Street space. Additionally, he will subdivide the front of the fifth floor, which overlooks Allen Street, and take on two to three gallery subtenants, including David Lewis, of the late Hell’s Kitchen-based gallery Balice Hertling & Lewis.

Mr. Abreu has been discreetly using the raw space for almost a year and a half for events, viewings and storage while he worked out the terms of the new lease. “I’ve been thinking about this for two years, and it’s been very frustrating and very difficult,” said Mr. Abreu. “It took a long, long time for us to get where we are now, which is the beginning of the abyss, which is the demolition.”

Ideally, Mr. Abreu said he hopes to open the new location in the winter, but is waiting on permit applications to be processed and then for the work itself to be completed. “It’s a major renovation, you know, we’re really redoing it completely,” he said. The debut exhibition hasn’t been decided, but Mr. Abreu said he will probably show Florian Pumhösl, an Austrian multimedia artist who helped design the new gallery. While Mr. Abreu currently represents 12 artists, he said he will be adding to his roster as well as hiring more staff members.

The Lower East Side has long been known for relatively small galleries, especially compared to those in Chelsea, though a handful of area dealers have upgraded to larger spaces over the past year, including Lisa Cooley, Laurel Gitlen and Bureau, and many others are said to be looking for larger locations. Once Mr. Abreu’s expansion is complete, he will have easily one of the largest presences in the neighborhood.

It’s an ambitious project, but Mr. Abreu said that he has been considering signs of fortune very carefully. “Eighty-eight in Chinese is good luck, but four is bad luck, and I’m on the fourth floor,” said Mr. Abreu with a laugh. “That’s why I took the fifth floor also, so I can divert some of the bad luck.”