Imagine yourself in an anxiety dream. Bald allusions to sex and carnality are everywhere, with an obsessive focus on the violence latent in any intimate crossing of borders or shifting of roles. But nothing feels solid or real. And then, like an afterimage, you wake up to cool and refreshing sublimation, immaculate in its artifice but no less sincere: “Minty,” once the name of performance artist Leigh Bowery’s band, now the name of a drag character performed by artist Matt Savitsky as well as of this group show curated by Ebony L. Haynes. “You have to see everything,” Mr. Savitsky’s “drag mother” (his mentor in drag) tells him while correcting his makeup in the artist’s short video Screen Test #1. “You have to see everything.” To practice his makeup application, Mr. Savitsky also cast his own face in plaster: Untitled (Part of Room Face Realness) consists of the artist’s face, doubled and upside down, made up to and beyond lifelike with foundation and purple lipstick, lips pursed around short pieces of white PVC pipe—like the pipe the artist breathed through while casting—and swinging from a thick black rope. “You have to see everything,” Mr. Savitsky mouths uncertainly to himself as the video ends.

Megan Marrin’s two haunting meditations on the body, Untitled (Featured In, Detail) and Untitled (Barr-Co), are made with photos and plastic forms from the Garment District. In the former, a photo of Ms. Marrin’s own open mouth, tongue stained with wine, is seen through a yellow-brown, neutered plastic male torso on a hanger; in the latter, it’s two closeups of a burning candle seen through a clear but headless male. Ben Horns’s three small paintings, two gray-tone, one yellow and blue, and all titled Thomas, stack the letters of an absent friend’s name into fretful geometries that expose their yearning in the very attempt to divert it. And Cassie Raihl’s three elusive assemblages of bound and set-aside found materials were also used by Nicholas Buffon in performance—but it’s Mr. Buffon’s own two lush, plastery oil paintings that offer the best hope of integration. Say It With Flowers, a bright yellow, bubblegum pink, lime green, sandy beige and pine green division of rectangles, is like a Louise Fishman with a sense of humor; Brunette is a self portrait of the artist flinging himself from a muddy green door into a muddy green world. Everything is apparently haphazard, but nothing is out of place; each is organically coherent but impossible to abridge. (Through Aug. 2, 2013) —W.H. 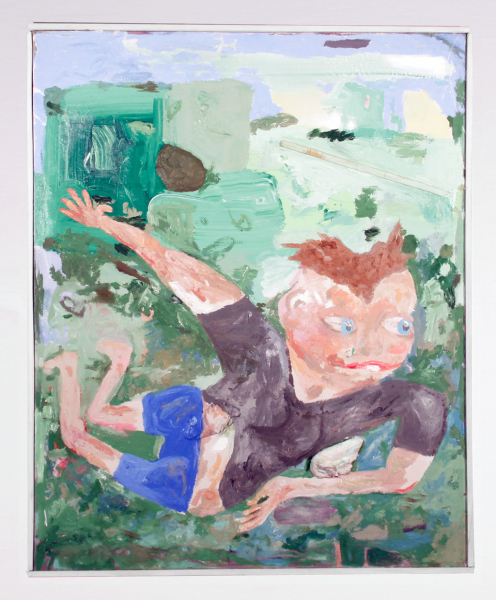