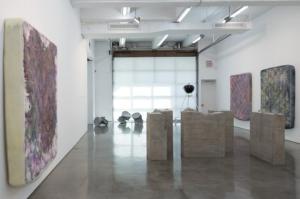 This group show, curated by Neville Wakefield, is as full as a clock factory of complex mechanisms directed at singular, simple aims—or at least, that’s how they look all together. Wilfredo Prieto’s Yes/No could pass 95 percent of a Turing test: a slight mechanical modification makes each of two standing electric fans into an autonomic decision-making machine. One nods “yes,” the other shakes its fan “no.” Kaari Upson’s three mattresses hanging on the wall, apparently florid with fluorescent mold, are actually made of colored and cast silicone. Cinthia Marcelle’s Surplus (spatula), a little spackle knife with a formal milk mustache of white latex paint across its blade, leans diffidently against the wall, while Tony Labat’s Leisure, an off-the-rack black steel grill, sits—serenely unattainable—six feet off the floor, thanks to its extra-long legs.

Claudia Comte’s contributions are a series of handsomely portentous shapes cut out of found wood with a chain saw; a pattern on the wall; and two films, including Nightscape, in which footage of extraordinarily beautiful Norwegian fjords is hidden behind a shifting lattice of black geometries. Bruno Jakob contributes a series of “invisible” paintings and drawings: tracings of water on paper create distinctly crackling shadows and lines, while the effect of “energy, touch, light, air and brain” on canvases primed bright yellow or orange must remain in the eye of the beholder. One undecided beholder is the white horse to whom Mr. Jakob displays a painting in his superbly funny black-and-white photo Untitled (Horse). But the best punch line comes from Jiří Kovanda, after two untitled setups—one a row of white plastic spoons jammed into the wall, just below head height, each containing a taste of vodka, the other a sturdy blue bicycle, one of its handles likewise jammed into the gallery’s drywall—From Here to the End of the World is a tiny button of a cactus in a little black pot on a tiny white shelf just under the ceiling. (Through Aug. 2, 2013)