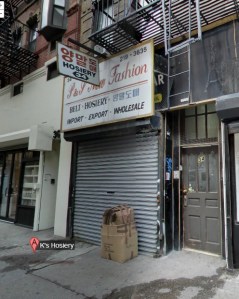 A semi-recent photo of the space. (Courtesy Google Maps)

The Monya Rowe gallery will leave its current second-floor space on West 22nd Street for a new, ground-floor space at 34 Orchard Street, the gallery announced in an e-mail last week.

The space places Ms. Rowe on a block with a number of other major galleries, Untitled and Miguel Abreu among them. She’ll also be across from the new Gasser Grunert space, which is also moving this September, to 33 Orchard.

“Minor renovations on the new space will occur in August,” according to the e-mail, “but the existing charm of the space, such as the 25-year-old import/export hosiery sign, and the gold and black facade will remain.”

In a separate e-mail to The Observer, Ms. Rowe said her Chelsea lease was up, and that she wanted to “increase the visibility of the gallery by moving to the ground floor.”

“The new space is in a really good location; the timing was right, so I signed the lease immediately,” she wrote.