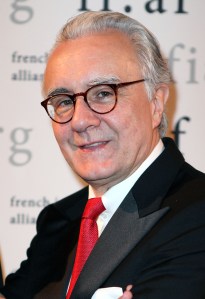 John Zorn, who’s the subject of a worldwide festival to mark his 60th birthday with dates at the Guggenheim, the Met, Lincoln Center and elsewhere, on his legacy: “People are not going to understand what I’m doing until I’m dead.” [NYT]

“‘I have learned a lot in the art world about getting things done,’ [Olafur Eliasson] says. ‘Frankly, if you can do a pavilion for the Venice Biennale, then you can set up a kiosk on the moon.'” [Bloomberg]

Here’s a profile of actress Gaby Hoffmann, the daughter of Andy Warhol actress Viva who grew up in the Chelsea hotel. [NYT]

The funds from a proposed antique tax in the U.K. would be given to source countries “to better protect their heritage.” [The Art Newspaper]

The largest building in the world, which includes a seaside resort and a 14-screen movie theater has opened in Chengdu, China. [The Guardian]

“A letter to Goldsmiths art students on capitalism, art and pseudo-critique.” [Prolapsarian]

“John Knight’s exhibition at Portikus could not be more current. Just some weeks ago, the contractual agreement of one of his artworks was violated.” [CAD]

Here’s a review of the Met’s “Civil War and American Art” show. [WSJ]

Pierre Cardin will not build a giant skyscraper in Venice. [The Art Newspaper]