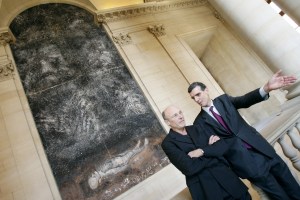 Kiefer with Henri Loyrette, then director of the Louvre, in 2007. (Getty Images)

The Massachusetts Museum of Contemporary Art will host a show of Anselm Kiefer’s from the Hall Art Foundation that will last at least 15 years. [NYT]

Paul Winkler, the former director of the Menil Collection who worked with Dia to help found the Menil’s Cy Twombly Gallery, has come out against Dia’s proposed sale of works by Twombly and Newman to benefit its acquisition fund. [MAN]

The Hirshhorn Museum and Sculpture Garden loses its board chairman. [The Washington Post]

Margaret Lee and Emily Sundblad at Off Vendome. [CAD]

Here’s a podcast on the mysterious Heyoon Pavilion in Ann Arbor, Mich. [99% Invisible]