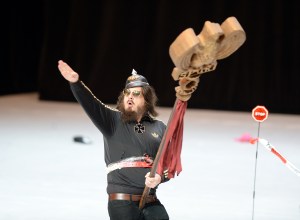 Christie’s first-half sales increased 9 percent, partly thanks to the Basquiat and Pollock records set at the most expensive art auction ever–the postwar sale on May 15. [Bloomberg]

Jonathan Meese will face charges in Germany on Thursday in connection with a performance in which he lifted his arm in a Hitler salute. They’re not such a fan of that sort of thing there. The artist, who argues that he is protected by artistic freedom, could be hit with a fine or jail time. [Artforum]

Three of this year’s New Yorker covers were by a German woman living in a tiny village. [Der Spiegel]

London will get its own High Line-style park in an art-rich area south of the Thames. [The Art Newspaper]

The Warhol Museum allegedly has good advertising this summer. [NYT]

On the artists who make habitats for zoo animals realistic. [NYT]