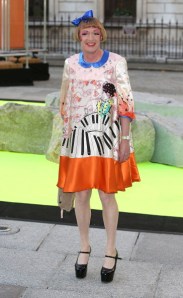 Here’s a look at how the defeat of DOMA will benefit same-sex couples in the art world. [The Art Newspaper]

Charles Saatchi and Nigella Lawson will divorce after photographs that appeared to capture Mr. Saatchi strangling his wife flooded the news. Mr. Saatchi called the incident “a playful tiff.” [BBC]

In the lawsuit over the Met’s admission price, former ticket sellers claim they were paid, in part, based on how much they collected from visitors. The Met denies this [Bloomberg]

“Later this summer, following years of legal skirmishing and politicking, the Los Angeles City Council is expected to vote on whether to lift its decade-old ban on private-property murals.” [Los Angeles Times]

Paul McCarthy’s “WS” is the second most popular show in the Park Avenue Armory’s history. [NYT]

This is why there have been so many legal cases involving the looting of Etruscan artifacts. [NYT]

“Every year, I buy up to 14 outfits for £500 each.” Grayson Perry on the annual contest for St Martin’s students to design a frock for him. [The Guardian]