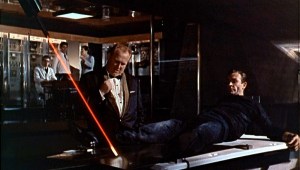 Bob Dylan’s son made an appreciative film about Jeffrey Deitch, says “art is for the people.” [LAT]

“Conservators are using lasers to clean the delicate frescos in one of Pompeii’s most popular sites, the Villa of Mysteries. If successful, it could change the way future conservation projects are carried out there.” [The Art Newspaper]

John Yeo has painted a six-foot portrait of Damian Hirst, pickled in formaldehyde, which will be included in an exhibition at the National Portrait Gallery in September. [Daily Telegraph]

“The Victoria and Albert Museum has received first-round approval for a Heritage Lottery Fund (HLF) grant of just under £5m”—$7.61 million—”for its new extension.” [The Art Newspaper]

David Ross: Qatar is “not going to lose an auction to anyone.” [AMM/The World/PRI]

Here’s are two imagined uses of John Cage music for Volkswagen advertisements. [Boring Like a Drill via @Gregorg]

Kaelen Wilson-Goldie at the opening of the Studio Museum in Harlem’s latest shows. [Artforum]

Robert Sietsema’s on the changes at Chelsea Market over the years. [Eater]