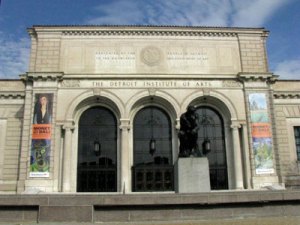 “The artist Andy Goldsworthy is creating a new work for the Presidio of San Francisco, the state park that was formerly a military base. The artist will hang a felled tree covered in cracked clay from the ceiling of a building within the park that was once used by the Army to store explosives.” [The Art Newspaper]

Exhibition A has an interview with New York Giants linebacker Keith Rivers, whose art collection is surprisingly good! [Exhibition A]

Thursday Styles offers up a profile of Maria Baibakova. [NYT]

As Katharina Fritsch’s Fourth Plinth sculpture is unveiled, a Danish private museum acquires Elmgreen & Dragset’s offering from this past April. [The Art Newspaper]

Jonathan Jones relays the history of royal-baby portraits, and proposes that the royal family hire “a painter like Paula Rego, who has a wild eye for childhood, to portray the royal baby as…a baby.” [The Guardian]

Peter Schjeldahl comes out in favor of the Detroit Institute of Arts selling its collection. [The New Yorker]

Joel Wachs, LA’s former city council president who negotiated MOCA’s longterm lease at what is now known as the Geffen Contemporary, will be on the museum’s search committee for a new director. [LAT]