Anthony Weiner’s candidacy is continuing to drop in the wake of revelations that he continued sexting random women long after he resigned from Congress, a new poll out this afternoon confirms. And that’s good news for his Democratic rivals, including Public Advocate Bill de Blasio.

The latest Quinnipiac University numbers show Mr. Weiner trailing the pack in fourth place, with the support of just 16 percent of the likely Democratic voters–a huge slide from his front-runner status just a month ago. And the majority of voters–53 percent–now think he should drop out of the race.

“With six weeks to go, anything can happen, but it looks like former Congressman Anthony Weiner may have sexted himself right out of the race for New York City mayor,” Maurice Carroll, director of the Quinnipiac University Polling Institute, said in a statement. “And with Wiener in free-fall, it begins to look like a three-way race again.”

For their part, a clearly excited de Blasio campaign touted the results in a statement.

“Today’s poll shows a wide open race,” said spokesman Dan Levitan. “Voters are looking for a true progressive voice, one who is not afraid to call for a ban on racial profiling or raise taxes on the wealthy to pay for universal Pre-K and after school programs. It’s no surprise that as the race heats up, more and more New Yorkers are supporting Bill de Blasio’s campaign.”

If Weiner drops out, the poll found, Ms. Quinn would get 30 percent of the vote, with 25 percent each for Mr. Thompson and Mr. de Blasio.

The poll, conducted from July 24th to 28th, is the second taken since Mr. Weiner’s latest sexting revelations, which have put into serious question the viability of his candidacy. The survey of 446 likely Democratic primary voters has a margin of error of plus or minus 4.6 percentage points.

These numbers come with a major caveat of still being relatively early, of course, as most of the campaigns have yet to fully open their campaign war chests and hit the airwaves with advertising spots.

Voters head to the polls on September 10. 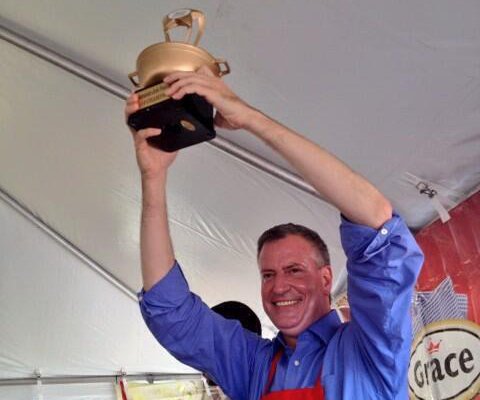