City officials and various candidates for office joined in the flood of outrage tonight following the not guilty verdict in the racially-charged trial of George Zimmerman for the killing of Florida teenager Trayvon Martin.

“Trayvon Martin was killed because he was black,” declared Mr. Thompson. “There was no justice done today in Florida.”

City Council Speaker Christine Quinn further slammed the acquittal as “a shocking insult to his family and everyone seeking justice for Trayvon.”

“Trayvon Martin was an innocent, unarmed young man with a full life ahead of him when he was tragically shot to death last February,” she said in a lengthy statement, which labeled the killing “senseless” and called for reforms to Florida’s controversial “Stand Your Ground” laws. “But we must also put an end to a culture that presumes any young man of color – little more than a child – is looking to commit a crime, simply because he was walking down the street.”

Over Twitter, another mayoral candidate, Public Advocate Bill de Blasio called the decision “a slap in the face to justice,” adding, “Trayvon Martin’s death was a terrible tragedy.”

“Today’s decision is shocking and highlights the sad reality that the day of equal justice for Trayvon and millions of other young men of color has yet to arrive,” said City Comptroller and fellow Gracie Mansion contender John Liu. “And it reminds us that we must strengthen our efforts to further equality and justice for all.”

“Keep Trayvon’s family in our prayers. Deeply unsatisfying verdict. Trial by jury is our only choice in a democracy,” he tweeted. “Let’s make the legacy of Trayvon a commitment to ending racial profiling.”

Members of the City Council also took to Twitter and Facebook to share their reactions to the decision, which came after more than 16 hours of deliberation.

“Not guilty verdict, really? I’m truly disgusted right now. #NoJustice,” tweeted Councilwoman Melissa Mark-Viverito, who was one of dozens of council members to speak at a “hoodie  rally” held last March in solidarity with Mr. Martin. “My heart is heavy,” she wrote of the verdict. “We a[r]e heading to a very, very bad place.”

City Councilman Ydanis Rodriguez was equally angry. “Sadly, a family in Florida will go to bed tonight still missing a son, still yearning for justice. RIP #Trayvon, America has failed you,” he wrote. “It is clear for all to see that racism is still alive & well across the country.”

“No Justice For Blacks In America, Again! If you kill dogs you go to jail (Michael Vick); kill a Black man and you walk free (Zimmerman),” he railed. “Rise Up Black people, protect yourself by any means necessary and Join a movement fighting for Liberation. America needs a radical change.”

Several candidate for other offices weighed in as well, including public advocate candidates Dan Squadron and Reshma Saujani, who said in a statement that “racism instead turned this trial into a gruesome display of character assassination.”

But the outpouring was not entirely one of outrage.

“Zimmerman verdict is proof that innocence until proven guilty beyond a reasonable doubt is still the cornerstone of the justice system,” he tweeted, adding that, “The rights of the accused cannot be compromised by the court of public opinion. Everyone is entitled to a fair trial.”

He further went after Mr. Thompson for his statement, saying he was “extremely disappointed with the amount of race baiting and political pandering on Twitter tonight” and that he would “expect this type of remark from [Rev. Al Sharpton] not from you.”

Updated at 12:28 a.m. with additional reaction. 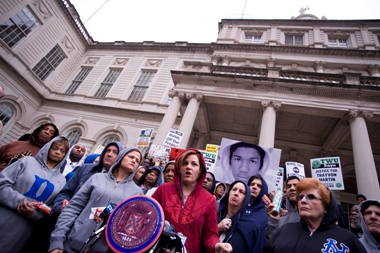