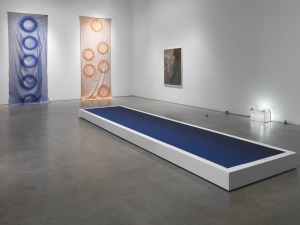 Named after Paul Gauguin’s account of his much-mythologized time in Tahiti, this exhibition, organized by Alexander Ferrando, proposes that the West is no longer engaging with other cultures primarily by stepping on their necks. Adrien Missika’s two towers of bamboo, for example, anchored in concrete bases, adorned with green and lavender boxes overflowing with tropical plants, and inspired by the designs of a Brazilian landscape architect, are both titled Jardin d’Hiver. Sam Falls’s Untitled (Large Blue, Glassel Park, Los Angeles, CA) and Untitled (Large Orange, Glassel Park, Los Angeles, CA), 15-foot lengths of dyed canvas left sitting outside with old tires on them to produce floating circles of orange or blue, have the minimal faux-primitivism of haute couture. And Tobias Madison and Emanuel Rossetti have scavenged cardboard cartons from various locations, including Chinatown—three white boxes labeled FRESH GINGER, one red and white box marked with the Chinese characters for Bally, a produce importer in Maspeth—lighting them from the inside with electric bulbs and setting them on the floor to make surprisingly ethereal sculptures. But if the new “winter garden,” thanks to global warming and shifting political fortunes, is a capsule of air-conditioning in the tropics instead of a hothouse under English rain, not everything moves so quickly: Willem de Rooij’s Blue to Black, 18 feet of cotton printed a rich, deep blue that fades toward black, was fabricated in Ghana, but the fabricators are still Dutch owned, and the piece is still on display here in Chelsea. (Through Aug. 2, 2013)