POINT PLEASANT – It was like he parachuted in here, the way Newark Mayor Cory Booker arrived on the boardwalk to entertain the troops, his trusted volunteers who distributed Booker’s literature in and among the waxed moving figures in this sensualists’ seaside paradise.

“What are they saying about me?” the U.S. Senate candidate joked with one of the volunteers, when he had the group seated at an outdoor table in Jenkinson’s in front of a pizza.

They would; this morning’s Quinnipiac University Poll shows him with a 42 point lead (52-10%) over his nearest challenger, U.S. Rep. Frank Pallone (D-6).

Booker appears to be treating his Aug. 13 Democratic Primary with care, paying attention on this Friday to the grassroots organizing aspect of his bid for New Jersey’s vacant U.S. Senate seat,  showering love and attention on his allies before they returned to the boardwalk to continue distributing Booker paraphernalia.

He’s so far ahead, the danger is he’s in that territory where every time he opens his mouth he could lose a digit, not add one on, or so fear at least two of his biggest boosters, speaking on condition of anonymity to PolitickerNJ.com.

“If he says something substantive, that gives the opposition ammo,” fretted a staunch Bookerite, who essentially advocates foam-filled fun between now and the primary.

But others with Booker – and these allies helped him craft his child poverty combat plan, which he rolled out yesterday – acknowledge that unless he talks seriously about policy, his badly limping rivals will try to gain traction with the line that he’s nothing but a twittering fool.

Still, his team wants him to stick to the script.

“I think you should ask the people,” said the mayor, gesturing to the tableful of Booker fans, following a Bill Bradley beach comb, accompanied by Bradley.

But what do you think?

“I think they want problem solvers,” said Booker, who’s selling himself as such.

In person and in his latest web ad, U.S. Rep. Rush Holt (D-12) gently dismisses him as a celebrity, but Booker insists that celebrity is but a facet of his problem-solving capacity. He recounted to his assembled group of backers the story about his collision with late night talk show personality Conan O’Brien.

The pair engaged in a verbal media ping pong match on the subject of Newark, with Obrien sparking the feud initially by badmouthing New Jersey’s urban crown jewel.

The mayor said it resulted in attention for the city, raised antennae for dollar donors, an appearance on the show by Booker and O’Brien forking over a donation of $100,000.

Derided by others as spotlight hogging, Booker calls it social media platforming – the perfect way for him to expose to a vast audience problems such as child obesity, poverty, and health.

“Ten to 15 years from now, everybody will be using FaceBook and Twitter,” he said, and the mayor welcomes that as a potential enhancement to democracy, where everyone is conversing on the same plane.

In his beachfront sit-down with allies, Booker asked everyone which presidential election they first voted in, and the range was broad – from Barack Obama to Ronald Reagan.

“I first voted for Jesse Jackson, in 1988 – and then when I was running for mayor against Sharpe James, Jesse Jackson came to Newark to campaign against me,” the mayor laughed.

Soon after, the troops were back to tramping up and down the busy boardwalk, and so was Booker, hitting the crammed tables with a broad smile and outstretched hand.

“You and Christie are going to spend the summer down here,” PolitickerNJ.com said. “Wouldn’t it have been easier for everyone for you to run against him, considering the time you’re both going to be spending at the beaches?”

He laughed – and kept moving. 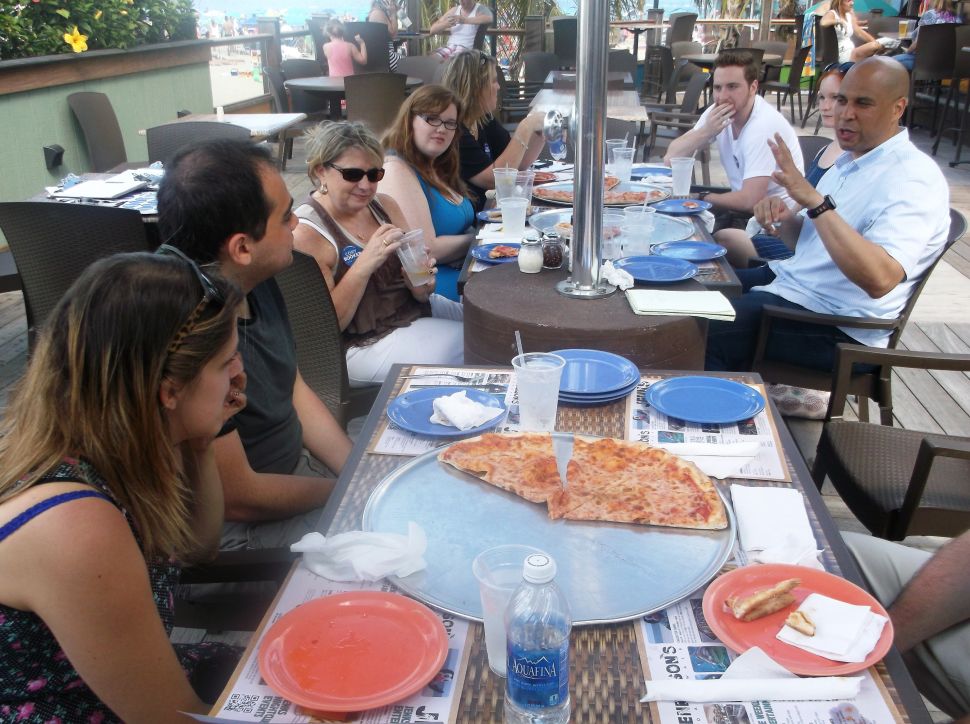