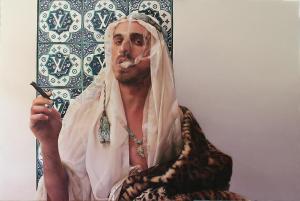 When Turkish painter Taner Ceylan first visited New York, he did not like what he saw. “It was a very depressing, very scary thing for me because it was winter,” he recalled earlier this month via Skype. “People are running in the street with coffees in their hands, Starbucks coffees, and eating on the corner, and this is scary. This is not usual for me.” The trauma didn’t last. A recent springtime trip made a convert of Mr. Ceylan (“Now I’m a very big New York fan”), which is good since he’ll be back in town soon for his first solo show with Paul Kasmin, who began representing him last December. The show, slated to open at the gallery’s West 27th Street space on Sept. 18, will feature the 10 works in his “Lost Paintings” series (2010-2013), a photorealistic exploration of Western Orientalist paintings, which were popular in the 19th century.

“Orientalism is a fairy tale view that Western people have of the East,” said Mr. Ceylan, who was born in Germany, citing works by artists like Delacroix, Ingres and Gérôme. “What I want to try is to show the truth, that these images are not the reality. In reality you cannot see naked women in harems or smoking women in harems.”

Instead of opulent palaces and half-nude hookah smokers luxuriating on carpets, Mr. Ceylan paints homoerotic encounters, blood-spattered white peacocks and dangerous-looking men who stare down the viewer as they smoke cigars. One such man stands before a wall of beautiful turquoise tiles that could decorate a mosque (if they didn’t contain the Louis Vuitton insignia).

As fresh reports of the ongoing antigovernment demonstrations in Turkey continue to surface, Mr. Ceylan’s images seem likely to attract greater attention. He has been more than an idle onlooker in the struggles there. When people began occupying Gezi Park in Istanbul’s Taksim Square in May to protest plans to erect a shopping center there, he joined the fray.

“They are making an all-new Istanbul without asking the people,” he said of city officials. “This is the point when people said, ‘Enough.’” Mr. Ceylan described the initial occupation as “a dream,” with sundry segments of society that wouldn’t normally intermingle living together in tents. He said that he and his friends have not been too badly affected by the police violence that has since swept the country, though they were tear-gassed near the park. 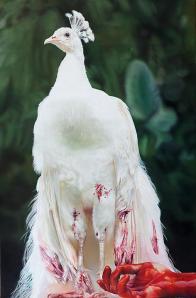 “He was very active with the protests, but also [with] coming together as a community and spreading news,” said Bethanie Brady, a Kasmin director, who happened to be visiting Istanbul on May 31, right after the demonstrations began. According to her, the awareness spread by artists like Mr. Ceylan, whose Twitter account has more than 5,000 followers, was especially essential early on in the protests, during the “complete media blackout.”

Now Mr. Ceylan is spending most of his time in the studio, preparing for his exhibition, though he continues to participate in the protests through social media, spreading information like the location of doctor friends who have set up “little spaces to heal the people” or the addresses of friends willing to provide shelter.

“Turkish art will not be the same,” said Mr. Ceylan, who noted the wave of posters, performances and other public artworks that have sprung up around the city. “[There] will be much more humor in art and much more politics.” The best thing he’s seen, he said, are some particularly resourceful musicians. “They are using the empty gas bombs as instruments and the tools they found on the streets, and they are making music,” he said. The band is calling itself Chapulchu Orchestra, in keeping with the protestors’ widespread reclamation of the term chapulchu (essentially, a jobless vandal), which Prime Minister Erdogan hurled at them as an insult. “Every term the government is saying to the protestors as a bad word, it became a good thing,” he said.

Beyond the greater freedoms at stake in the protest, Mr. Ceylan said he partly became involved because of his personal connection to Gezi Park. “Everyone must cross Taksim Square once in a week because it’s in the center of Istanbul,” he said. “Every Istanbuler has his own memories in this park.” In fact, it was Central Park that changed his mind about New York. “I’m in love with Central Park,” said Mr. Ceylan. “I saw old people, so it was very good for me.”

“There was a day we were supposed to meet in the evening, and he’s very punctual and very organized, so any time you have a meeting it’s very productive and he’s always there when he says he’ll be there,” said Ms. Brady. “He was at the park all day and sends me the most charming text saying, ‘Bethanie, I’ve had the most beautiful day in the park, can we please maybe meet tomorrow? I just can’t leave.’” Mr. Ceylan plans to revisit the park when he returns to New York for his fall show. 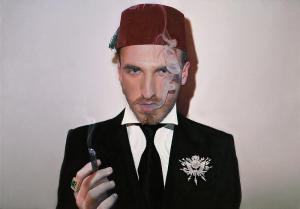 But despite his travels, and all of the decadence that he depicts in his work, Mr. Ceylan said that he’s happiest at home with his cats and canvases. People see “the homoerotic life, the rich life, the hotel rooms, the beautiful naked men and they are thinking that I’m living like this, but I try to explain, ‘No, this is a dream of mine. I’m living in front of the canvas.’”

A few of the paintings on view will be familiar to art fair attendees, who may remember his compelling portrait of Ottoman princess Esma Sultan, which Mr. Kasmin showed at last year’s Miami Basel or Birth of Hope (2013), the painting of a snowy white bird stained with gore that he exhibited at Frieze New York in May. Mr. Ceylan said the latter is “a gate” to his new series, “The Golden Age.” “I tried to bring together the beautiful and the cruel side,” he said, which could be a metaphor for his view of Ottoman history—“You cannot separate the Ottoman war from the Ottoman beauty; it was all together”—and life. “If you want to reach something beautiful,” he said, “you must go through the hell.”