FRANKLIN – Those whom the polls have consigned to garbage time in the U.S. Senate race took turns at a microphone tonight to address a group of 80 seniors in this gated community where at least three of the four contenders made a direct pitch for local love.

“I see many familiar faces,” U.S. Rep. Rush Holt (D-12) declared, easily dropping the names of people in the crowd.

The town’s in his district.

“Until the last election, I did represent half of Franklin,” Pallone reminded people.

“I live here,” announced the lone Republican participant in tonight’s forum sponsored by the Somerset Run Civics Club. “I feel this is part of my community and something to be proud of.”

Speaker Sheila Oliver (D-34) received maybe the biggest appreciative murmur when she opened with the line, “I look forward to the day when I can put down the gavel and be in a similar place.”

There were no chairs or place cards for Newark Mayor Cory Booker or former Bogota Mayor Steve Lonegan, the front runners for the vacant Senate seat respectively in the Democratic and Republican parties.

Pallone took the opportunity to scrap a little with Eck, a medical doctor who’s running in large part as an opponent of Obamacare, which the congressman from Long Branch championed.

“I worry about Obamacare setting up more bureaucracies,” the Republican complained. “Doctors are getting tired of it.”

Pallone defended Obama’s healthcare reform as a means of securing healthcare coverage for everyone and improving coverage for patients with pre-existing conditions. He also expanded his defense of the government program to include others, including Medicaid, Medicare and Social Security.

Holt appeared intent to promote himself as the purest progressive in the group. If Pallone was the state’s leader on Obamacare, Holt re-emphasized his commitment to accomplishing single-payer universal healthcare coverage.

He wants a carbon tax to help fight global warming, and he wants the investor class to pay the same tax rate as everyone else.

He borrowed a line from one of his web ads in a playful poke at Booker, whose fire alarm heroics last year won him some favorable headlines.

For her part, Oliver noted the absence in the NJ Congressional delegation of a woman, and argued the importance of diversity of perspective in the federal upper house, a chamber dominated by graying millionaires. 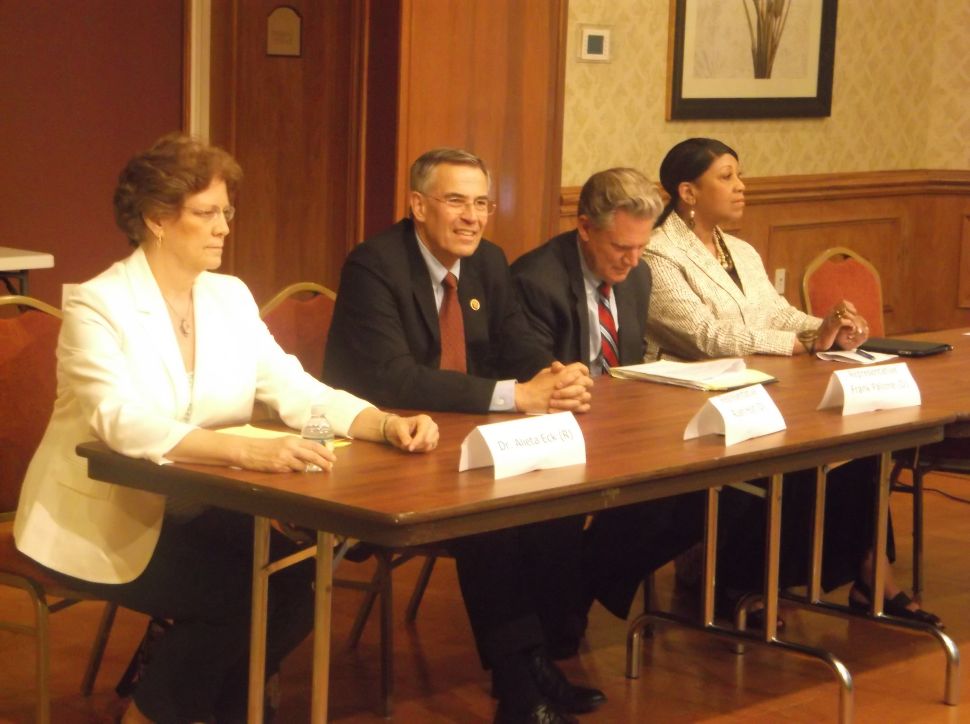