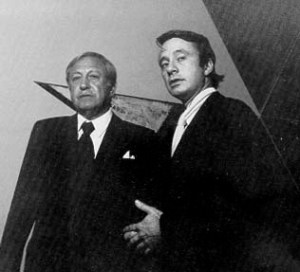 Here’s a nice piece about John Hightower, who whipped the New York State Council of the Arts into shape in the 1960s before serving as the director of the Museum of Modern Art for a brief and eventful 19 months in 1970 and 71. He passed away earlier this month at the age of 80.

I mean, behold what was basically the guy’s first day on the job:

“On the evening in May 1970 when he was being welcomed to his new job with a reception in the museum’s sculpture garden, a group of activist artists — stirred to action by the start of American bombing in Cambodia and the death of four demonstrators at Kent State a few days before — crashed his party, heckled the guests and splashed about in the reflecting pool, demanding an end to the war in Southeast Asia.”

Not to make light of a legitimate protest, but come on. In the reflecting pool! And that’s not all:

“Soon after, demonstrators protesting the exclusion of new artists from exhibitions began blocking the museum’s entrance, demanding the divestiture of all artwork more than 30 years old from its collection.”

In his short tenure at MoMA, Mr. Hightower got a call from Governor Rockefeller complaining about a Hans Haacke piece, saw the museum’s staff unionize, then had to deal with the staff going on strike when there were layoffs.

He once said in an interview he was “relieved” when he was fired.