To date the Hoboken Mayor’s race hasn’t captured a lot of attention outside the mile square city in part because of the perception that incumbent Mayor Dawn Zimmer has divided the city’s old political guard.

“I’m a worker,” Ramos said. “I’ve always worked, that’s what I’ve always done. I’m going to give it my all. I think we’re going to get it done.”

Ramos said many individuals who backed Peter Cammarano in 2009 felt dissed by Zimmer after Cammarano got bagged on corruption charges.

These were people who had nothing to do with the charges, just people who loved Hoboken and happened to back Cammarano for mayor, he argues.

“She ostracized many members of the community,” said the assemblyman, who also believes Zimmer has presided ineffectively over a bad business climate in the town.

He feels the divided old guard narrative is false and will be exposed as such. 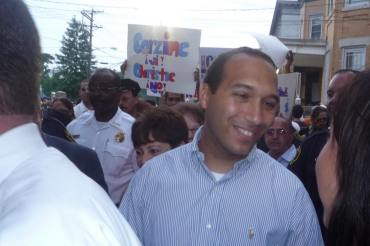