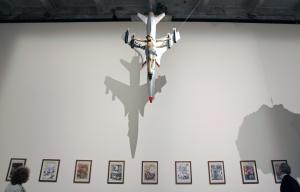 The storied Argentinean artist León Ferrari, who has had painfully few shows in New York and who won the Golden Lion at the 2007 Venice Biennale, died last week at the age of 92. As it happens, the new Pope Francis, who served as an archbishop in Buenos Aires before being elevated to the papacy earlier this year, was visiting Brazil when the artist passed away, and made some remarks to a crowd that seemed to refer back to his famous 2004 clash with the artist.

From the Associates Press:

“Ferrari happened to die only hours before Francis invoked one of his more memorable phrases during his current tour of Brazil: Speaking to thousands of Argentines in Rio de Janeiro’s central cathedral on Thursday, the pope exhorted the youth not to “put faith in a blender.” He repeated this metaphor several times, saying faith shouldn’t be mixed nor weakened, but taken whole.

“Years before he became Pope Francis, Buenos Aires archbishop Jorge Mario Bergoglio called Ferrari a blasphemer for displaying statues of the Virgin Mary in a blender, little saints in baby bottles and Christ figures in a toaster. Ferrari’s idea for the 2004 exhibition, mounted next to the historic Recoleta church, was to criticize how he believes religion is force-fed to the masses.”

According to the wire service, a spokesperson for the church said that he did not know if the pope was aware of Ferrari’s death, but said that it did not have anything to do with the artist.

Hearing news of Francis’s election in March, Ferrari reportedly termed it “a horror.”

The artist’s last major show in New York was a two-person presentation with Mira Schendel in 2009 at the Museum of Modern Art, whose website has a nice overview of work from the exhibition, “Tangled Alphabets.”