State Sen. Brian Stack (D-33) reportedly threatened a federal agent on a public street after thinking the law enforcement official was one of two men conducting surveillance on his home, according to a published report.

NBC News reports Stack and two others charged at one of two agents that had been parking their official vehicles near the lawmaker and Union City mayor’s home. The reported altercation occurred just days after the FBI raided City Hall as part of a corruption investigation.

The news station reports one of the agents lived on the mayor’s block and had invited the second agent to stay at the residence after having lost his home in Superstorm Sandy. Law enforcement told NBC Stack’s neighbor works for the U.S. Department of Homeland Security – not the FBI.

“He was parking on the mayor’s street because he lived on the block,” NBC reported. “A second agent who lost his home in Hurricane Sandy was parking on the street nearby and crashing on that fellow agent’s couch until he could find a new home, officials said.”

Stack told the outlet he would never threaten a federal agent and blamed the off-duty official for approaching his girlfriend without identifying himself.

“What would any man do if their wife or their mother or their loved one is being detained in a vehicle, and the person won’t identify themselves and you see a bulge in their belt?” Stack told NBC.

According to the report, no police complaints or charges were filed by either side and the agent has since moved to a different location.

Stack’s attorney, Dennis McAlvey, told the station they were given “erroneous information” about the altercation and indicated it was unlikely the agent ever lived on the block. 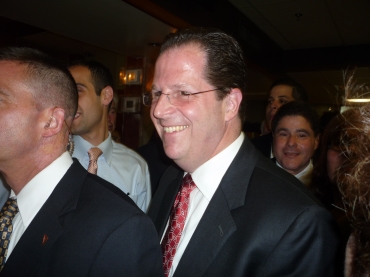