PISCATAWAY – Gov. Chris Christie and Democratic leaders celebrated the merger of Rutgers University Monday with several health science schools that previously made up the University of Medicine and Dentistry of New Jersey, saying the years-in-the-making move will provide an economic boom statewide and to major industries like biotechnology and health research.

The merger enables the state’s largest public university to have hundreds of millions of dollars more in research available and could open the door to more public-private partnerships with pharmaceutical companies, among other entities.

The product of the merger with seven former UMDNJ schools is the Rutgers BioMedical and Health Sciences facility.

“For decades, Rutgers has been recognized for its outstanding faculty, students and programs in the arts, sciences, humanities, social sciences and professional schools,” Barchi said in a statement. “Combining our many existing strengths with our broader mission of medical education will elevate Rutgers to the ranks of the nation’s finest comprehensive research universities.”

Christie said “politics, and that’s all it was, politics” served as the roadblock for many years from such a merger taking place. But now that it has, New Jersey is destined to see economic growth, particularly in South Jersey, and more public-private partnerships with research firms, like pharmaceutical companies.

Assemblyman John Wisniewski, (D-19), of Sayreville, another strong supporter and a Rutgers University alumnus, thanked Barchi for his leadership on the issue. He said with tongue firmly in cheek that Barchi was able to oversee the merger over the past year “without distraction.”

He also said the merger will make Rutgers a “world-class hub” for high-tech medical research.

“Doing this was not easy. It was never going to be,” the governor said. “Today is his day as much as anybody else,” Christie said in reference to Barchi.

While seven of eight UMDNJ schools have been absorbed by Rutgers, the school of Osteopathic Medicine falls under the control of Rowan University in Glassboro.

“The gems will shine even brighter,” he said about the colleges falling under Rutgers’ umbrella.

The plan keeps University Hospital in Newark intact to continue providing care for the less well-off residents in the surrounding area and makes it a teaching hospital.

The merger means Rutgers University enrollment will be more than 65,000 students, with some 25,000 faculty and staff members, and 33 schools and colleges between the New Brunswick, Newark and Camden campuses. 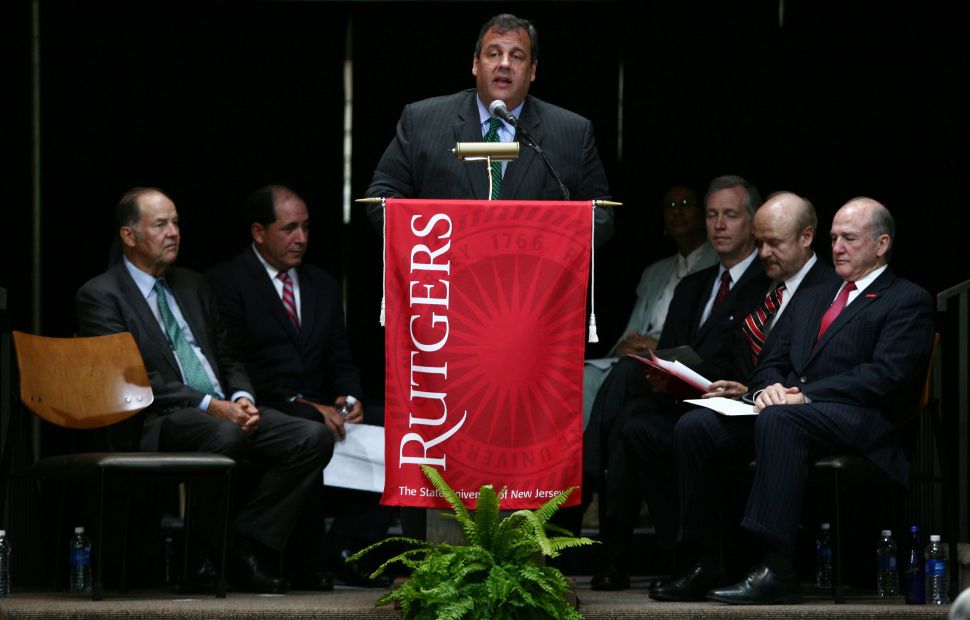