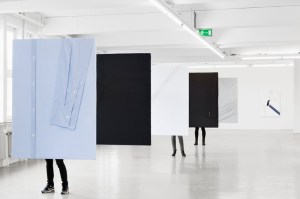 Installation view of ‘Sanya Kantarovsky: You Are Not An Evening,’ at Gesellschaft fur Aktuelle Kunst, Bremen, through Aug. 25, 2013. (Photo by Tobias Hübel, courtesy GAK)

Casey Kaplan announced that it has added New York–based artist Sanya Kantarovsky to its roster, and will present his first-ever New York solo show in May 2014.

A graduate of UCLA’s MFA program, the Moscow-born Mr. Kantarovsky is probably best known for paintings of a dandyish character, sometimes dressed in tails, flitting about various semi-abstract environments, though he’s also made sculptures featuring the figure and worked in performance.

His work has popped up in a number of strong group shows in New York in recent years, including the post-Sandy “Out of the Blue” at Bortolami in 2012, “Phases,” which was organized by Kelly Taxter at Wallspace that same year, and “3328 Hours of Sunshine” at Clifton Benevento in 2011. He also produced work for Cleopatra’s “CKTV” project for the 2012 Shanghai Biennale.

Mr. Kantarovsky shows with Marc Foxx in Los Angeles and Tanya Leighton in Berlin. At the moment he has a one-person show on view at the Gesellschaft fur Aktuelle Kunst, Bremen, in Bremen, Germany, through Aug. 25.